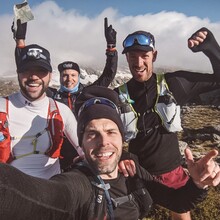 On the day the conditions were mixed with temperatures ranging from 2 to 12c throughout the day and winds north westerly 20 to 30km/h which dictated our decision to complete the round in an anticlockwise direction. Our team of four started at sunrise and carried enough food for the day, stopping only to top up with water from mountain streams on route. Restricted visibility (clouds) and patches of snow made things a little more interesting than initially expected, while the lack of established footpaths along some parts of the route significantly slowed progress. All in all this is an epic round which is deserving of multiple FKT attempts over time. Get out there!