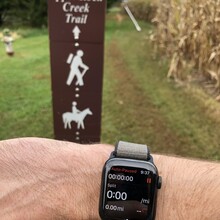 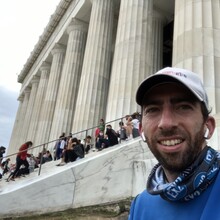 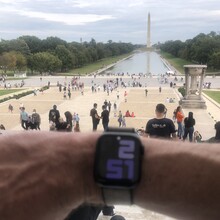 Like others, I became interested in FKTs, and this particular FKT, after months of canceled races due to COVID-19. I’ve lived in DC for 18 years, and I’ve spent much of my time training in Rock Creek Park, so I was excited to see this route added back in the spring, and I planned on an attempt in late summer or early fall.

Over the past month or two, I scouted the entirety of the route over a couple of runs to get familiar with things and plan my approach. My only tiny gripe with the route is that the last mile or so--a loop around the Reflecting Pool--is not part of the Rock Creek Trail. If we're taking a purist's perspective, the terminus of the Rock Creek Trail is at the bronze Arts of Peace: Music and Harvest sculpture near the top of the Watergate Steps just west of the Lincoln Memorial. Seems like the justification for including the loop was to extend the route to 50K. Given that there have been both supported and unsupported FKTs logged on this route that include the loop around the Reflecting Pool, I figured the loop is now a fixture on the standard route.

The first 3.5 miles or so of the route are mostly on grass adjacent to farms and large suburban properties, and occasional stretches of trail. The next 6 miles are through some lightly technical trail and small hills which lead to Lake Needwood and Rock Creek Regional Park. I felt great running around 8:00 pace to that point. After Lake Needwood though, you enter a 14.4-mile section of the Rock Creek Trail. Might just be me, but this part is rough. It's tough mentally because it's pretty monotonous, and the surface is a bit hard on the knees and hips after coming off trail (or maybe I'm just getting old). I hit my first major low transitioning past the DC border and entering Rock Creek Park, so I walked a good chunk of the uphills of the Western Ridge trail to try and recover. Coming back to pavement on the south end of Rock Creek Park, my calves started to lock up pretty bad, so I had to slow the pace a bit and stop to stretch a bit. The last few miles go somewhat quickly as you pass Thompson's Boathouse and meet up with the Potomac. The loop around the Reflecting Pool is deceptively long, especially after 30+ miles, and worse when it's jam packed with visitors as it was today. Finished up at the top of the steps of the Lincoln Memorial, took a few photos, paused a moment to breathe, and then departed since it was super crowded.

Temperature was in the upper 60s and low 70s with good cloud cover, so it was a great day for the run. I ran with a 2L bladder and carried about 1000 Calories worth of GU, Honey Stinger chews, and Honey Stinger waffles. I'm notoriously bad about sticking to my nutrition plan, and I only managed to get down 700 Calories on the run. I took 4 Enduralyte capsules. I did a half refill of the bladder at the public tap near Pierce Mill.

Excited to complete this project and hold the unsupported FKT...for now. Feel free to comment with any questions, and I'm happy to share my notes.