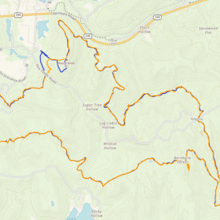 I thought I was going to be racing the rain, but it had already started when I got there.  It was tolerable at the start though.  About half way through it started coming down much harder and was causing the vegetation to hang much lower and forcing me to bat the branches out the way constantly.

This ultimately ended up being a bit frustrating because of missing a turn.  I had taken a look at the other two unsupported FKTs, and both had a little out and back section at about 11.5, which made me think that it was just part of the trail rather than a turn they missed.  So, it wasn't on my radar as something to be prepared for.  I ended up missing the same turn (clearly it's not marked well at that location).  I never recovered from that missed turn, ran all the way to the bottom of the hill and into a gate that was topped with barbed-wire.  I ran part of the way back up the hill, but on one of the trees there was a yellow marker... OK, so I thought maybe I WAS on the right trail and turned back around to go back down the hill.  I found what appeared to be a trail running along the fence line, which had some blue markers on it and just followed those.  At that point I figured it was over, I had managed to screw it up at the very end... just don't get completely lost and freeze to death at this point.  Eventually though, I ran back into the trail and just finished it up from there.

In looking at the map beforehand, I thought right at the trailhead might be a problem spot.  I ran the last mile of this as a warmup to make sure I wasn't missing a turn in that last mile.  But, I hadn't considered where I did screw up as a potential problem spot because the trail that all 3 of us mistook for the Millennium Trail isn't even considered an official trail - it's not even on the map.

I'm not sure if this will be considered an FKT, but I'll submit it anyways and let the FKT gods decide.  The way I took is actually a little longer, so we'll see.  I'll be out near Elizabethtown for work again over the next couple weeks, so I'll see if I can make another pit stop and give this another crack, this time with my warmup including the turn and section of trail that I missed.