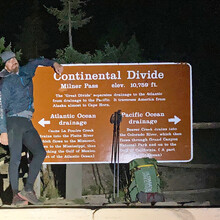 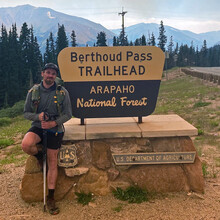 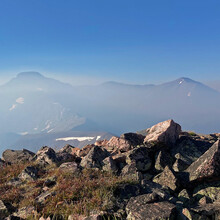 Full trip report coming soon, but I wrote an extended description of the route and my motivations for doing it here:

I completed this trip as a wholly unsupported fastpack, bringing along everything I needed - save for water,  with me at the start of the route. Free water was found either along the route, or melted using a stove I brought to take advantage of the copious permanent snow fields that almost touch the ridge crest itself. Key free water spots for me included a melting snowfield right before the Cleaver, as well as Lake Dorothy right before Mt. Neva. Key permanent snowfields included Andrews Glacier and the St. Vrain Glaciers. These snowfields are relatively easy to come across until about Rollins Pass. Afterwards, things do get a lot more dry. The route itself was essentially bare of snow, being August.

I bivvyed right on the ridge crest with a system that included a 35F rated sleeping bag, an R5-rated sleeping pad, a UL bivy, and a silnylon tarp/ground cloth. Bivy spots included right below Ogallala Peak, below Navajo Peak, and right on Rollins Pass.  I was relatively comfortable temperature-wise each night.

I brought 3 days of food, but was out for ~17 hours longer than expected, so there was some slight rationing - it wasn't all that bad and I finished with a bar or two, as well as some Sour Patch Kids.

I didn't hit any substantial weather on the trip. A constant breeze accompanied me, but wasn't too bad. The hardest environmental conditions faced was the constant smoke billowing out from the historical amount of wild fires burning out west. This especially impacted visibility and breathing. As a sufferer of Exercise Induced Asthma, I was fearing the worst (scratching!), but came out relatively unscathed, to my surprise.

My fastpack was exceptionally lonesome in some stretches. There was day hiking traffic near Flattop Mountain, and I said hello to a few runners navigating McHenry's Notch. I ran into Ryan Smith and Jeff near North Arapaho, who were out scouting for their own attempt of the line later this season (and had the opportunity to share my own beta!). Once they peeled off at South Arapaho, I was alone again until around James Peak, where a CDT thruhiker from Portland shadowed me until Berthoud Pass. I crossed paths with into Laura Kaplan and Larry on Parry Peak as well. They were going north, and I was thankful to be able to get a ride from them from Berthoud after I finished! All these meetings were of course purely happenstance. I had a public tracker, but only told a few close people what my plans were, using it for safety reasons rather than for armchair stadium entertainment purposes. I wasn't 100% confident that I could do the trip.

Although I got turned around in a few little spots when I was particularly tired, my biggest routefinding blunder happened at the tower that features the plane crash wreckage between Arikaree and Deshawa. I climbed this tower, failing to understand that the route merely wraps around it on the east on wide grassy ledges. The climbing here was harder than anything on the rest of the route, and very exposed. I was stuck in a small notch just after the summit, not knowing how to go forward but completely convinced that linking the two named mountains meant following the ridgeline proper here. Forward meant solving a V4 boulder problem with 300 feet of exposure on both sides of the knife edge ridge. I also didn't feel that I could reverse the moves I had just done to get back to the plane crash wreckage - maybe a 5.7 downclimb. After an hour or so of thought, I made the decision to carefully backtrack and I made it down safely, but with a heavy mind full of thought at my decision making, but no worst for wear. Be careful out there!

Along with this un-named tower, I also summited Skyscraper Peak, which is slightly off the main ridgeline. For the FKT to be properly challenged, I would implore future challengers to summit all the peaks that I did (or more! if there are more) at a faster time, but I don't feel that the unnamed tower described above, or Skyscraper Peak are required points. The latter is too dangerous and Skyscraper isn't on or close to the main ridgeline. Both were done as out-and-backs and not traverses.

The crux for me of this route was the ridgeline leading to Pauite Peak, which I found to be loose and dangerous. The North Ridge of Pauite Peak proper was one of the best parts.The worst part of this route is the loose and disordered gully system leading down from around South Arapaho to Quarter to Five Peak.