"But. It is written. If the evil spirit arms the tiger with claws... Brahman provided wings for the dove. Thus spake the super guru."

This route is the extended version of L.A. Freeway fully realized (though without Longs Peak itself), with a start at Milner Pass and finishing at Berthoud Pass. This more than doubles the distance of that route, as well as bringing the total number of named peaks you'll summit to over 50! The majority of Rocky Mountain National Park will be traversed north to south, as well as all of the Indian Peaks Wilderness and James Peak Wilderness being traversed north to south.

Similar to L.A. Freeway, and very different from the Pfiffner Traverse variations, the Continental Divide should always be roughly followed and every significant/named peak needs to be summited rather than avoided. Along with the miles of Class 3/4/5 scrambling, major challenges need to be addressed for a complete traverse between passes: water resupply, bivy locations, and general route finding.

The route can be traversed in either direction (note that Berthoud Pass is ~ 550' higher than Milner).

In the cult car chase film, "Vanishing Point" from 1971, where the "Challenger" and delivery driver Kowalski races a 1970 Dodge Challenger from Denver to San Francisco in order to evade chasing police officers and to win a bet he makes with his dealer. Also, the start or finish of the route always seems to be just out of sight when one looks for them from the highest summits on the route.  So in line with the "LA Freeway", we could call this route "Vanishing Point". 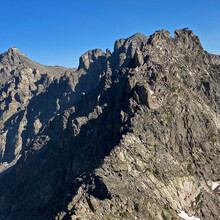 Fantastic achievement Justin and it was great bumping into you and joining for a short section! Nick P and I made an attempt on this last year and are hoping to make another in the next couple of weeks. We have been calling this The PHAT Route i.e. Pfiffners High Alpine Traverse as a nod to the original intent but also to distinguish it from the other route on this site. The current route name as submitted is certainly a bit 'vanilla' and uninspiring so I hope we can settle on something more 'fun'!

Oh and you should prob list out the peaks that are required to be summited as many are not listed on common mapping sources. I think Nick and I have 47 peaks identified currently but perhaps we'll run over a few that we didn't identify!?

Note that Chris Harkness did this same traverse in ~5 days just after Justin completed it!  His engaging trip report is here:

Probs to Chris - it's amazing we were on the route at the same time. He was out there on his on volition.

As yet another point of interest, Oak Nelson has also claimed to have done the line on 9/3/20 (almost), starting at Milner, but ending at Rollins Pass. He's put up the route on MP:

I've written my trip report and it can be found here: