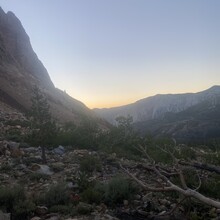 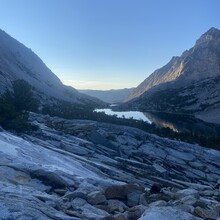 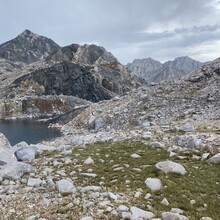 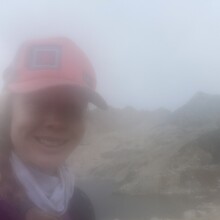 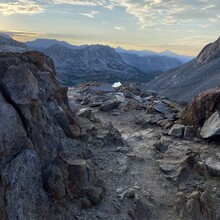 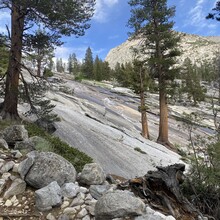 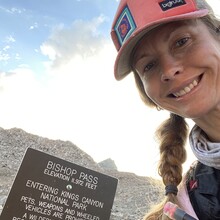 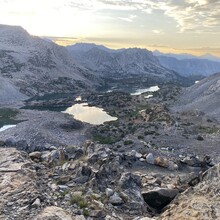 First known solo unsupported time for the ladies! Started at 5:14am at North Lake. Felt good over the first pass and was moving well down to the JMT junction, where I swam under the bridge and filled water/electrolytes. It was hot as I moved slowly up canyon towards evolution basin. During evolution climb clouds started building. Around Wanda lake I encountered MANY (too many) mosquitos until the rain sent them into hiding. I was spurred to Muir pass with a lighter sky, while thunder stuck to the ridge-lines on either side. On top of the pass I encountered many backpackers waiting out the storm inside the hut. Clearer skies down canyon and the storm at my back I kept moving. Highlight of the day was seeing the sunset over bishop’s pass. I used my lightweight headlamp for the first time for the last few miles to the van, but it was so terrible I used my phone as a second source of light. I made a wrong turn right at the end which added a few minutes but stopped my watch at the sign.
This was by far the biggest unsupported/remote route that I have done. I battled stomach issues all day (please don’t throw up!!) which slowed me down a lot. I was unable to eat or drink enough even though I had enough food and water. I carried 4000 calories from the beginning (I ate 2400) along with a .6L bottle filter and 0.5L chest bottle. Ben and I fastpacked the loop in 3 days in June so I was familiar with the route and location of water. Ben ran the shuttle for me and had food and drinks waiting. Thanks babe!