The Evolution Loop is a magnificent route through some of the most inspiring terrain in the High Sierra. Technically the route is not a loop as the start and finish are at different locations (more accurately, it’s a horseshoe) utilizing the North Lake and South Lake trailheads in the Eastern Sierra outside of Bishop (note: the trail and/or road segment that links these two trailheads would not be fun). The "loop" entails ~55-56 miles and 10,000+ ft elevation gain including three high passes – Piute Pass (11,400 ft), Muir Pass (12,000 ft), and Bishop Pass (11,960 ft). Bishop Pass and Piute Pass are on the Sierra Crest while Muir Pass is on the Goddard Divide. About 25 miles of the route are on the John Muir Trail passing by the famous Evolution Valley/Basin and the iconic Muir Hut at Muir Pass. The sections off the JMT include spectacular Dusy Basin and Humprehy's Basin.

The Evolution Loop via Lamarck Col is an abbreviated route that follows the original Evo Loop after surpassing Lamarck Col (12,880 ft) and holds roughly the same amount of overall elevation gain. With incredible terrain of the High Sierra and difficult passes, this Loop is ~37-38 miles with close to 10,000 ft elevation gain. The three high passes are Lamarck Col Pass (12,880 ft), Muir Pass (12,000 ft) and Bishop Pass (11,960 ft).

Todd Vogel provides the following description completing a true loop: I’d long wondered how the Evolution Loop, as it’s usually reported, can fairly be described as a ‘loop’, when in fact it is a horseshoe. North Lake to South Lake, or the reverse, has long been a deservedly popular run and backpack, traversing some of the most spectacular terrain in the Sierra, but it requires a shuttle to get back to the starting point. In the running world, the classic runs are typically a point to point, or a complete loop. “Evo”, as it’s commonly done, is neither of these. The fix? There are two obvious options. First, you can run the paved road that connects South Lake to North Lake, which adds roughly 12 miles and a couple of thousand feet to the 55 mile horseshoe. Well, all that pavement is rather a dud, completely inconsistent with the spirit of the rest of the route.

(Having done the “loop” 8 times, 5 clockwise, and 3 counter, I prefer clockwise, mainly because coming up out of French Canyon at the end of the day is more runnable than coming up the grind out of LeConte Canyon. But YMMV, and both directions are a grand day out.)

Alternately to running the pavement, there is a sequence of trails and short cross country segments that can be linked between the two trailheads. The plus is a link up that is more in spirit with the rest of the run. There must be a minus, and it is the old trail connecting Lake Sabrina to Grass Lake is pretty much gone, so there’s some bushwhacking and thrashing to get up that hill. A minor irritation in the scheme of things, the linkup proved to be a full day’s adventure, adding some 11 miles and 3,000’ or so to the day.

I’ll describe what we did, and what I would do next time. What we did was park at South Lake and run downhill on the stock trail from the high point of the upper parking lot. The trail begins just past the green gate. It starts with a slight uphill (good campsite on the left), passing a small shed that is a gauging station. Follow the trail several miles, down to the pack station parking lot. From the lot head uphill about a hundred feet and then turn right onto the old road, which feels more like a trail now. Follow that for a mile, down into Willow Campground. Cross the paved road, heading slightly downhill to the Tyee Lake trailhead. Follow the Tyee Trail up and over Table Mountain, passing George Lake, then steeply down to join the Blue Lake/Sabrina Basin Trail. That last half mile getting to the Blue Lake trailhead is rocky and up and down. The trail pops out onto pavement where a left turn takes you to the end of the road and the day use parking area at Lake Sabrina.

Go to the end of the parking area and pass the little store on its right, north side. A fisherman’s trail begins. Follow the fisherman’s trail for roughly a mile around the lake, to a group of Sierra Juniper trees. Here a decent, old, trail branches off to the right, past a faded sign nailed to a Juniper, heading steeply uphill. The climb begins tamely enough, with a real trail and a couple of switchbacks. That said, especially in the dark, the trail quickly degenerates into scree and brush. Despite that, maintain a bearing pretty much straight up, and in half an hour or less you will arrive at a saddle, and shortly after pick up a use trail that heads down to Grass Lake. Follow the drainage. After a mile or so from the saddle you will arrive at Grass Lake. Cross at the outflow and pick up a use trail that traverses the lakeshore and heads up and out to the north, to connect with the main trail down to the Paiute Pass Trail.

I’d do two things differently next time: 1. I’d scout the thrash up from Sabrina to the saddle in the daylight. 2. I’d park at the Tyee trailhead, and start the run from there.

Pondering north to south: The traverse from Grass Lake to Sabrina would be easier. Sabrina up to George Lake is very steep. Clockwise on the Evo loop has the advantage of less sun in the face, and much more runnable at the end, out of French Canyon. Should be faster than as described above. 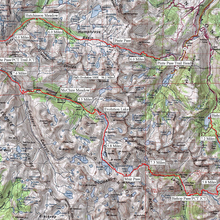 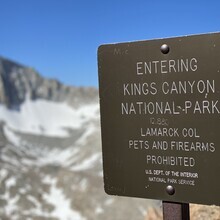 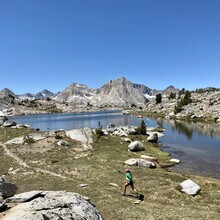 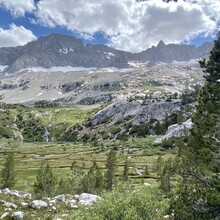 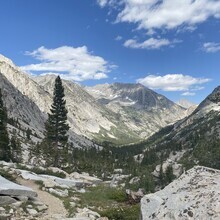 This route on the old FKT site
http://fastestknowntime.proboards.com/thread/372/evolution-loop-ca