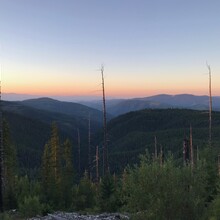 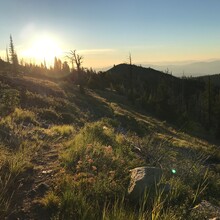 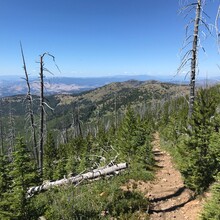 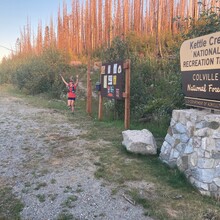 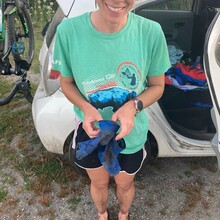 My plan was to run the Kettle Crest Trail, Standard Route, from south to north as the two guys who did it last fall and have the male FKT ran it. I planned to run solo and unsupported, only filtering water that was naturally occurring along the trail. My friend planned to ride the same route that day and then if I did not emerge at the north end by dark, he would come back south to find me, but we planned for him to be way out ahead and finish in 1/2-2/3 of the time it would take me. There is little cell service, but I did have a Garmin inreach for emergencies. We camped at the White Mtn. trailhead on Friday, August 14th. On the morning of Saturday the 15th I woke up feeling great, but he woke not feeling so good. We decided to get going anyway and departed from the trailhead at 5:41am. It became clear quickly that he was on the struggle bus and was not going to be able to save me if I got into trouble. I was ahead of him and at mile 26, and so I stopped to wait. After he arrived it was clear he needed to rest and hydrate considerably if he was going to finish (there are really no easy bailing spots after 13.5 miles at Sherman Pass. So, I stopped for 40ish minutes with him there, conceding my own personal best elapsed time for the day and putting my solo/unsupported status into question. After he was feeling a bit better, we decided that the best way to get us both out safely was to stick together/meet up every five miles or so though to the nearly 44mi northern terminus at Boulder Creek. We managed to finish before sunset despite the unexpected trajectory of the day. We saw quite a few hikers and mtn bikers around the Sherman Pass and Jungle Hill sections of the trail that are most popular and accessible. The Kettle is a gorgeous trail and I already have plans to best my own time, which I think would have been about 12hrs on Saturday if I had not slowed to help my friend. That said, I was happy to do so and accept/enjoy those unexpected hiccups as part of endurance adventures.

The day was beautiful, if a bit hot for a few hours in the afternoon in the exposed sections, but the water was plentiful along the trail. I only stopped to filter just before Wapaloosie around mile 20.5 and around mile 36 from a stream that crossed the trail

*I understand if this does not qualify as solo and/or unsupported, but rather just  however if anything, I was supporting him, stopping to filter extra water, share my electrolyte tabs, and verbally motivate him; he was in no way pacing me.

**A note about my GPS: I did not notice it cutting in and out at all, but the Coros data does have breaks, especially in the last quarter of the data. The Strava upload smooths it out, but misses at ton of elevation--his came in at 9,793. There is a reroute that we think might make the overall elevation slightly less than when the male FKT was set last year which has a little more vert.

Great work Kate! I can't imagine the extra stress of ensuring your bail out biker made it safely made that day any easier.  I am a bit jealous of the views we only glimsed on our fog fest last year. Do you think you'll try to squeeze it in again this year? The fall color was surprisingly vibrant.