he Kettle Crest Trail is the granddaddy of long-distance, high-country routes in Eastern Washington. Over the course of its 44 miles, it presents a virtual highlight reel of dry-side beauty, from sage-scented meadows to subalpine parkland.

Located in the far northeast corner of the state, the Kettle Crest features a half-dozen of Eastern Washington’s highest peaks, some topping out at more than 7,000 feet. Nominally a ridge-running route, the Kettle Crest tallies up nearly 8,000 feet of cumulative elevation gain over its length. Yet there are no cloud-piercing spires here, just a mosaic of old-growth forests and open sagebrush meadows, from which shimmer distant vistas of the Cascade and Rocky Mountains.

Owing to its diversity of habitats and lack of human development, the Kettle Range boasts some of the best remaining wildlife habitat in Eastern Washington. Hikers should keep their eyes peeled for cougar, moose, mule deer and black bear, all cruising the high country. But in summer, the dazzling array of wildflowers—buckwheat, lupine, aster, yarrow, paintbrush, hawkweed and others—will likely keep your attention focused on the foreground.

From the southern trailhead, ascend through profuse wildflowers on White Mountain before beginning a view-packed stretch past Barnaby Buttes and Bald Mountain. The southwest slope of Snow Peak holds great camp spots near the shelter. Skirt Sherman Peak and Columbia Mountain, then traipse along a sagebrush lined ridge; camp sites are scattered along the way. The high point is 7,140-foot Copper Butte, where fragments of an old lookout remain.

Descend through a ghost forest of snags and settle in for open grasslands and lupine-filled fir forest, all the way to the northern trailhead at Boulder Pass. This is one of the sections of the trail that creep under ghostly silver snags left standing from past wildfires, most notably the 1988 White Mountain Fire, which scorched more than 20,000 acres of the southern Kettles. In these sections, wildlife, wildflowers and wide-open views have taken the place of the trees, making this one of the scenic highlights of the region.

Aside from a few wooded saddles, virtually the entire route offers up big views: to the south, the Colville Indian Reservation and northernmost reaches of the Columbia Plateau; to the west, the Okanogan Highlands and, beyond, the Cascades; to the north, the peaks of British Columbia; and to the east, Idaho’s Selkirks.

To the Colville tribe, whose ancestral lands encompassed the Kettle Range, the mountains bear sacred significance. On White Mountain, near the southern terminus of the trail, hikers can inspect cairns built by young members of the tribe during vision quests. Subsequent generations of visitors have also fallen under the spell of the Kettles, and a dedicated group of local conservationists has spent the last 40 years pressing for a congressional designation of wilderness for the Kettle Crest.

WTA Pro Tip: Tapped springs, never more than a half-dozen miles apart, can hydrate hikers who plan refills carefully. Keep in mind this is open rangeland, and cattle congregate around the springs, some of which have been maintained in less-than stellar fashion by grazing leaseholders. Filter all your water.

Numerous people have apparently done the Kettle Crest Trail in one day.  Jason & Kathy Vaughn traversed from north to south in 23h56m on 10/18/2013, obtaining a GPS reading of 46 miles for the trail.

There have been others who've done this, too:

I'm aware of 11 people (and one dog) who've done the south to north version at least once, plus a 12th person who started at the Pass and did the last 30 miles. Jake Wilson would have the fastest known time of 11 hours in 2009. I've done it twice, and my fastest time was 15 hours.

Maybe we should plan a Cake Walk unofficial ultra in August 2014! I think I'm good with just doing it one direction, but it would be cool to be there at the same time someone attempted an end-to-end-to-end. 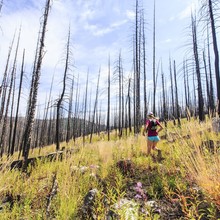 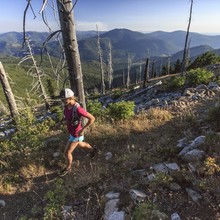 This route on the old FKT site
http://fastestknowntime.proboards.com/thread/448/kettle-crest-trail-wa

On 9/15/2019 Nate Lynch and I will be attempting the Kettle Crest Trail starting at the south trail head and running unsupported to the north trail head. There has been very few trip reports/fkt attempts on this trail but from what we have found researching the FKT belongs to Jake Wilson who finished the trail in 11 hours in 2009, referenced here https://www.spokesman.com/stories/2009/oct/04/out-about/. We will be running with a goal to beat that time. We will have GPS verification through Strava.