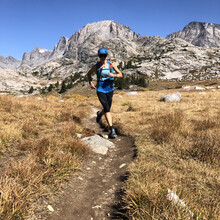 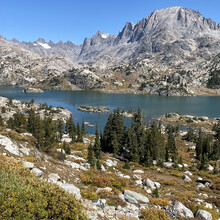 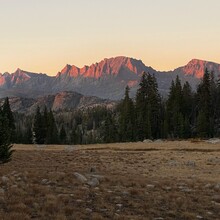 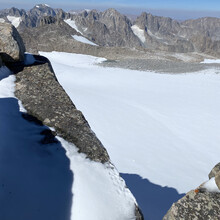 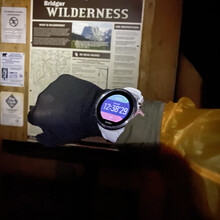 The plan was to try to set a standardized time for the women's FKT on Fremont as there had not been one officially summited yet. My partner Leif Routman wanted to join as a final big day in the Winds before the snow hit in the alpine. We were aiming for 10 hours car to car. We started off at 8:20 in the morning on September 14th after a two hour drive from Jackson. After the first few miles Leif started feeling queasy and slowed down a bit. By the time we hit Indian Basin he was pretty unwell with consistent nausea and a headache. He still wanted to push for the summit so we did although at a very slow pace. There was a light layer of fresh snow and ice up high but enough rocks were poking through to summit without getting too wet. We spent less than a minute on the summit before reversing back down. At this point we knew our original time frame was out of the question and what was more important was making sure we got back to the car safe and sound, even if we had to walk. Leif was able to jog certain sections but for the most part we had to power walk back. We made it back to the car just before 9pm at a car to car trip 12:38:29. Certainly not the competitive time I had wanted to set but happy to have made it back with a sick partner in a reasonable timeframe. The plan is to set a faster time next summer.