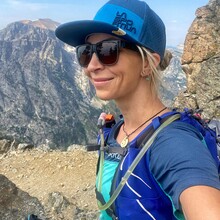 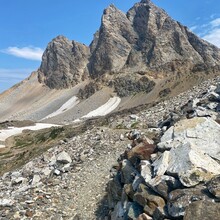 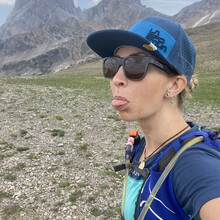 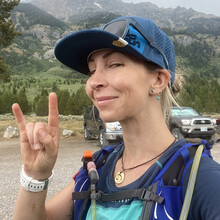 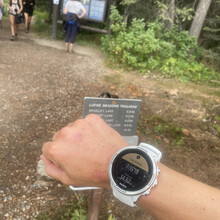 Started at Lupin Meadows TH at 8:58am on 7/22/21. Ran at a standard clip along the Valley Trail with one small navigational mistake at Bradley Lake. Kept the clip up until mid way up Death Canyon where I unluckily became trapped behind a park service mule pack train for about 15 minutes. Power hiked the steep switchbacks to Static Divide then continued to run until power hiking again up to Hurricane Pass. Wanted to hit Hurricane sub 5 hours but managed to hit the pass at 5hrs 5 min in. Cruised for the most part down into Cascade aside from an unfortunate trip and fall on the rocks. There was drizzle, rain, and storms throughout the day which made for wonderful temperatures and also less people on the trail. Inspiration Point and the trail around Jenny Lake were still packed full of people which was very difficult to navigate and probably cost quite a bit of time as well. Almost wonder if it would be faster and more pleasant to swing around the east side of the lake instead. Finished the loop at the Lupine Meadows TH 7:15:19 after starting. I think I could have run sub 7 hrs if not for the mule pack train up Death Canyon.

Also should note that the original information on this site describing the route is off. It's 33.5-34.5 miles ( my watch said 34.33) not 28.8. Name should be Teton Circumnavigation not Tetons.