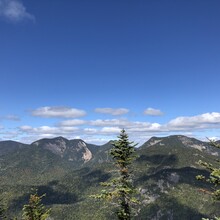 As is typical of ADK high peaks trails, the mileage and vertical don't give a full picture of this route. While Dial and Nippletop are fairly tame hikes, the addition of Colvin and Blake makes this a much tougher route. I had great conditions for my run today. There was a little ice and mud, but trail conditions were about as good as can be expected here. It was chilly at the start and temperatures were forecasted to be freezing at the peaks with wind chills in the low 20s, so I packed microspikes (which I didn't need) and multiple layers. I started at a slow and steady pace to avoid sweating too much early on. I carried all the water I used (carried 3 liters and used just over 2), but there are some ponds at the bottom of Elk pass in between Nippletop and Colvin, as well as a nice stream along Gill Brook trail that was flowing well even in today's dry conditions. I started and stopped my watch at the St. Huberts hiker parking along Rt 73, as is shown in the GPS file and listed in the route description on the route's FKT page on this site. This added about 1.4 miles and 15.5 minutes to my run as compared to keeping time from the hiker station at the AMR gate, as the first men's FKT submission did. I stopped frequently for photos, but unfortunately the photo upload feature wasn't working well when I submitted this, so I only have a one here.