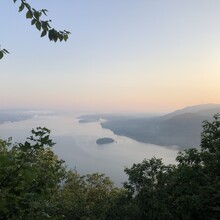 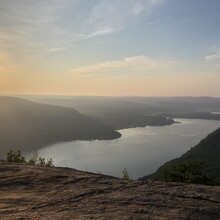 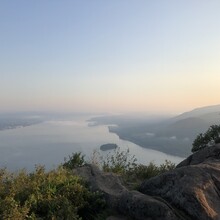 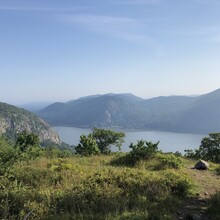 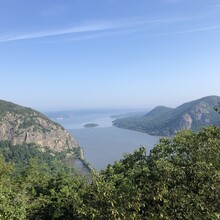 This is a tough and scenic route on an iconic mountain, offering great views of Breakneck Point and the Beacon mountains across the Hudson. North Point, towards the end of the route, offers views of Butter Hill and the main summit climbed earlier in the route. Views of Storm King can also be found in many art museums, as it was a frequent subject of artists of the 19th century Hudson River School. At least up until the early 2000s, the mountain was also home to quite a bit unexploded ordnance from the nearby United States Military Academy at West Point, as an artillery range was in use adjacent to the mountain until 1940. After forest fires in 1999 set off several shells, a search located a number of live artillery rounds within 25 feet of hiking trails. Bushwacking in the park is still not recommended!

In my run today, I set out slow and steady, pacing myself for the humidity and heat (with highs forecasted in the 90s). I packed 3.5 liters of water and drank nearly all of it. I was pleased with how my legs felt, particularly after a harder effort at Anthony's Nose the previous day and my usual difficulty running in hot conditions. For someone unfamiliar with the trails, the route is not straightforward, so I was happy to have a gpx track to check at intersections. All in all, it was a good day on the trails, and I stopped for photos at all the viewpoints. I've driven down 7W and 218, the roads cut into either side of the mountain, countless times, and as a cadet loved running down the railroad tracks at the foot of the mountain along the Hudson. I always found solace between the quiet river and these majestic peaks. It was fun to finally run these trails and see my old favorite running route from a bird's eye view!