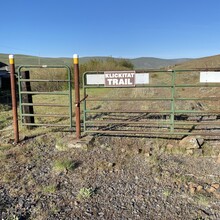 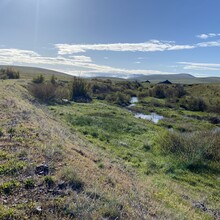 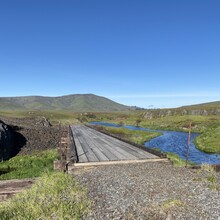 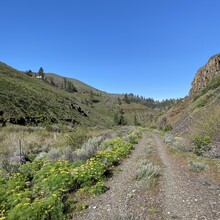 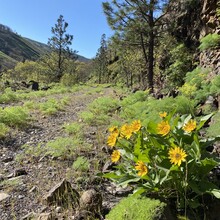 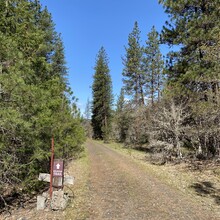 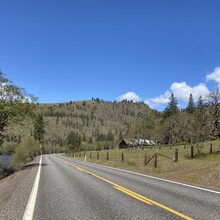 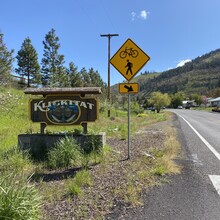 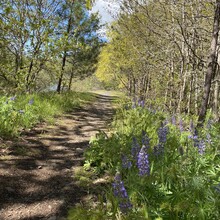 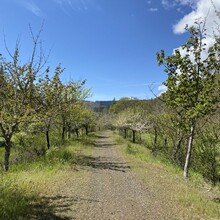 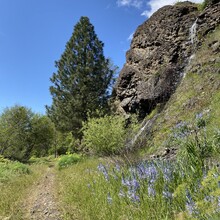 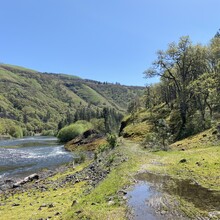 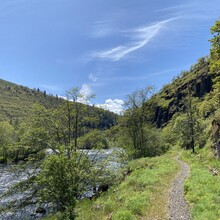 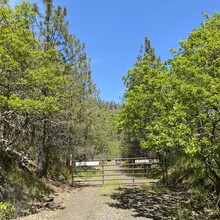 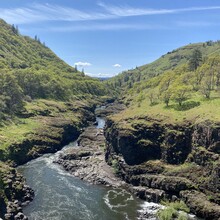 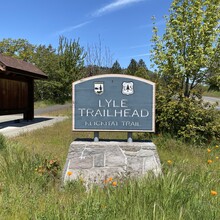 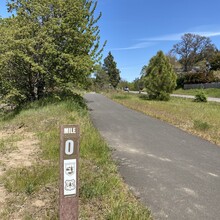 I started from the Uecker Road trailhead a few minutes before 8am under clear blue skies. The temperature was 47 degrees and there was a west wind. A Salomon 8L hydration vest carried 2.5 liters of water, snacks, Garmin inReach mini, cell phone, water filter and a small emergency kit. I had left my car at the Lyle trailhead endpoint and a friend generously shuttled me to the start.

I chose to start from the more remote Swale Canyon (East) while I was still fresh on my toes. The first four miles cross farmland with marshy areas that eventually form into Swale Creek. This creek follows the base of the canyon, the same path as the Klickitat trail. I saw marmots, rabbits, ground squirrels, waterfowl and red-tailed hawk. Once I dipped into the canyon proper I was surprised by the chorus of frogs coming from Swale Creek. Are you kidding me, how awesome is this?  Other than the crunching of my feet on the trail, the croaking of frogs and the rushing of the creek no other sound was heard for miles and miles. This section was absolutely magical. Two wild turkeys announced I was coming to the end of the canyon at the Wahkiacus community around mile 14. For the first time, I crossed paths with other people on the trail.

Now on the Klickitat Canyon section, the trail takes a diversion along highway 142 for 3 miles due to a trestle out across the Klickitat River. Road running is one of my least favorite things, but I didn't mind it today since it was a break from all the rocks. Temperatures were rising, but not yet to the day's max of 68 degrees. At the community of Klickitat, the official trail gets back on track at Durkee Road around mile 17. Pass by an old rail car, a school and through a small neighborhood. After a few miles the Pitt trailhead is reached (approx mile 20). I dug the pb&j and chips out of my pack. I was starting to feel a bit hot & tired, but knew I needed to remain focused lest I trip on a rock. So, there are endless rocks on the Klickitat Trail. Big rocks, small rocks, loose rocks, embedded rocks, slick rocks, sandy rocks, sneaky rocks. Rocks that look softer on the other side of the trail till you cross over and realize they are just as hard as the rocks you were just on. agh.

The next 9ish miles were on the west side of the Klickitat River, a quiet stretch of trail shared with a handful of mountain bikers coming from the Lyle end of the trail. I enjoyed the river, wildflowers and free-range cows. The remains of a deer on the trail was a reminder of mountain lions in the area. I stopped for a final view of the canyon at the Fisher Hill trestle across the river. Under 2 miles to go! I picked up the pace and ran to the Mile 0 marker at the Lyle Trailhead. What a great day out on the trails!

The previous trail reports from the Klickitat FKTers were invaluable in mapping out this day for me. Thank you.