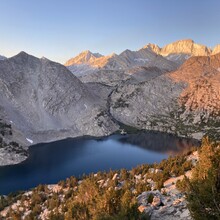 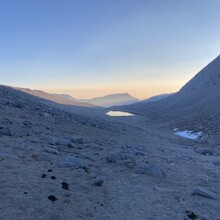 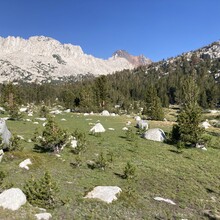 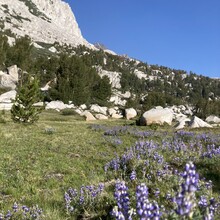 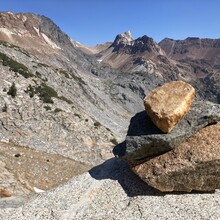 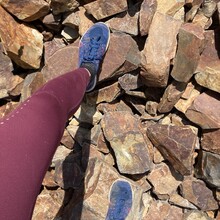 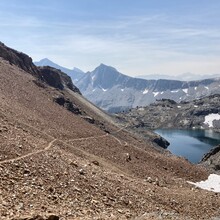 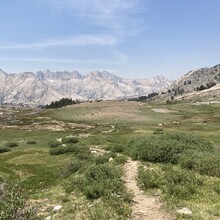 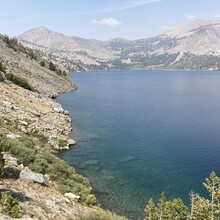 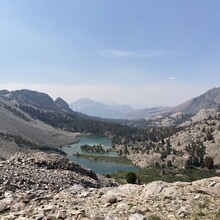 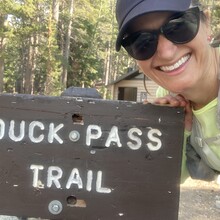 The day started in the dark at Rock Creek / Mosquito Flat (10,200 feet) at 5:20am. Starting from the Little Lakes Valley Trailhead (where there is a bathroom!) it's a pretty quick right turn up the Mono Pass Trail. The ascent up to Mono Pass (12,060 feet) was smooth, but once up and over the pass I could smell smoke that had blown into the valley from fires in the vicinity. The flat section at the top of Mono Pass (@ 3.5 ish miles) is spectacular and feels other-worldly, with the small but lovely Summit Lake and sandy terrain on top. The descent into the valley was smoky, but tolerable. The handful of backpackers I met were packing out due to smoke. On the descent into the valley, I crossed several streams that were perfect for refilling on water. Around 9 miles in, there's a turn right and up onto Hopkins Lake Trail. I followed it as long as I could but luckily Ford Nickels (the runner who posted first posted this route to the FKT site) had warned in his report that the trail disappears for large sections. For me, around 10.5 miles to the top of Hopkins Pass at 12.9 miles was a mixture of jumping over streams, finding and then losing a trail, climbing through bushes, meeting rock walls that I don't have the skill to ascend, and then retracing my steps to try a different way up once again. I had both Ford's route from the FKT site and the MAPS.ME map both downloaded on my phone for offline use, and between the two of them, made it to the top of the pass. These were my slowest miles of the day and where I inadvertently added some distance. Someone with better navigation and prior experience near Hopkins Pass would have much less trouble. Up and over Hopkins Pass and reunited with a clear trail with many cairns directing the way brought huge relief. The immediate descent down the back of Hopkins Pass was steep, rocky and scrambly, but seeing McGee Pass (11,876 feet) in the distance was awe-inspiring, knowing that the next several miles would take me down to the meadow and then back up to nearly 12k feet. Plenty of places to refill water on the descent and crossing the meadow. At mile 14 or so, I met a trail split that goes downhill for the McGee Trailhead or uphill (left) to the pass. I made the left and was stoked to see that the trail up the pass was easy to follow, though super rocky and with a few minor snow patches crossing the trail. The color contrast of the ruddy dirt/rock, blue lake, and white snow against the backdrop of the sky are stunning, At 16.5 miles I was at the 2nd highest point of the day: McGee Pass. Though the view into the valley was a bit smoky, I was thrilled to be headed downhill for a long stretch. I encountered every type of trail surface on the way down - pure rocks, rocky, sand, soft meadow, slate, and finally forest floor. Plenty of opportunities to fill up water the whole way down. Note that between mile 7 and 22, I saw only 2 people; that whole section felt quite remote. Around 22 miles is a right onto the John Muir Trail (JMT). Joining with the JMT was a boost as I enjoyed greeting other people along the route. On tired legs, the ascent up to Lake Virginia (24 miles) was slow-going for me, but also a relief knowing that the highest passes of the day were well behind me. Lake Virginia was stunning in color and size. Upon arriving at Purple Lake (26ish miles), I took a right turn at the junction, and carried on and up. The remainder of the trail was familiar to me, having done out-and-back runs from Duck Pass Trailhead, so I was happy to be back in familiar territory, though the ascent to Duck Pass (10,800) felt a lot harder here with nearly 30 miles already in my legs! Duck Lake is stunning; the trail runs along the left side of the lake and gains the final section of elevation here. I stayed to the left (up) when I came to the Pika Lake split (30ish miles). My legs were relieved to get to run downhill for the final 4 miles of varied terrain - rocky switchbacks, a few creek crossings, sand, and rock-dotted forest floor with shade! This was the busiest section of the day with many folks doing day hikes along the final 3 miles. I made a right at the Emerald Lake junction (32.5 ish miles) and finished the route at the Duck Pass Trailhead. Note that where the route ends there are bathrooms and dumpsters for all your needs, but cell reception here is spotty. My Strava data had me at 34.3 miles and 7,963 feet of elevation gain.