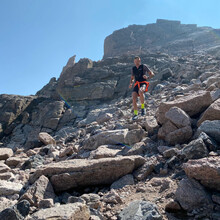 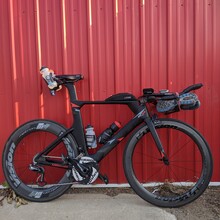 Total time was 6:23:56 to and from the Boulder city limit sign. I didn't take any other interval time checks, so the following times are plus or minus a handful of seconds each.

I started out late in the morning (8:00AM) with tired legs, and worries the Cables route was going to be iced over again. This was the third attempt I've done going up Cables. I didn't make it up the other two times due to thick ice. Since snow and cold weather was predicted for the next day, I decided that if I was going to have a chance at even trying the Duathlon, it would have to be today.

I made it to Lyons in a little over 23 minutes, feeling okay but not great. Riding is my strong suit, but because of Covid I’ve done very little training this year. By the Peak to Peak intersection on St. Vrain, I was pretty upset with my time (1:25 I believe). I'd averaged 275 watts by that point, and was already feeling pretty bad. I was hoping to hit the Peak to Peak intersection at around 1:15, but the headwind and my legs weren’t cooperating.

The wind grew worse as I climbed. By Allenspark, it was gusting at 30+ miles an hour, and I actually had to pedal down some of the steep hills to keep my speed up. I was considering pulling the plug on the entire attempt at this point because I knew I needed to make up an hour or so on Anton's bike splits to be in contention for the FKT, and the wind seemed to have other plans in store.

I got to the trailhead tired, defeated, and pissed off, but I had a fast transition time so decided to see if I could at least make it to the top of Longs for the first time on Cables (I've summited twice on Keyhole).

I finally figured out where the shortcut goat trail is, and took that up. Two climbers who I passed said that Cables was mostly clear of ice, but to be careful of the wind. I wasn't sure what that meant, and continued trudging up the goat trail and hoping that I was going the right way. During my eight days of training for this, I got extremely lost twice taking short cuts while trying to figure out how Kyle Richardson and Anton Krupicka get up the mountain so incredibly fast (other than just pure athleticism and skill). My brother Galen, who's a climber, put together an excellent PowerPoint presentation that gave step by step directions on the fastest route for me the other week, but each time I still managed to get lost. But not this time!

I trudged up the mountain with lead legs and fought 50 mile an hour wind gusts, yelling at the wind in frustration and having to hike most of it instead of run. But I made it to the base of Cables in 91 minutes—not bad for me, considering the conditions and how tired I was from doing the Keyhole the day before. I was happy to see two climbers rappelling down, thinking I could grab onto their rope if I slipped. Just kidding. They said the same thing as the other climbers near the trailhead—there was minimal ice. I slowed down and took a few deep breaths as I began climbing since I was super dizzy and breathing like a 90-year-old caged lion with asthma.

Because there was very little ice, climbing the Cables was a breeze. In fact, I realized that the previous time I attempted the Cables, I had essentially made it past the crux but didn't realize it. I'd been a bit sketched out about having to do another pitch of what I'd just done, and I wasn't excited about downclimbing with wet, slippery shoes.

I got a bit mixed up route finding to the top of Longs after I finished the Cables, but figured it out without too big of an issue and without losing more than a minute or two. I quickly texted my wife Adelaide at the top to let her know I was okay, then turned around without taking in the beautiful brown sky view that pretty much stopped at Mt. Lady Washington. The smoke was getting really bad at that point.

Descending the Cables was easy because, over the last week, I got used to descending on the outside of the crack, away from the ice. Because it was clear this time, it felt super secure. The two climbers that had rappelled down snapped a quick picture for me near the bottom (and later emailed it) and I made it through the Boulder field pretty fast.

With the massive headwind that I’d been battling on the way up the mountain now pushing me down, I felt like I was flying at points. I’d never tried running down the mountain before because I’ve been nursing a bum knee all summer, but my footing was good and I didn’t take any spills, choosing caution over courage because at this point, I was getting confident that I’d set a new best time.

I did get a bit turned around going through the Battle Mountain area and took a different trail than I did on the way up, but I ended up popping out unscathed, and I still hadn’t fallen (though I came close a few times). I flew down the normal trail and briefly got confused trying to find the turn after Goblin. Not to worry though, I found it shortly after, then greedily chugged water at the creek. I rolled both ankles in the next five minutes, made it to the big drain pipes at the bottom (chugged more water and filled my hand-held bottle again) and was on the bike after a two minute transition.

I gave a few hoots of joy ripping down the access road, knowing that, barring a flat tire or two, I was going to take the FKT. Then I felt that gut-dropping squishy feeling in my wheels. Shit, I do have a flat! I bounced both wheels up and down for the next half hour, paranoid that I had a slow leak, but it all ended up just being in my mind.

The descent down St. Vrain was fast and the wind was swirling like crazy. A few cars held me up briefly, but luckily they were speeding like everyone seems to do these days (the only time I ever condone a car speeding is when it’s currently slowing me down on a descent while I’m riding). I made it through Lyons and onto 36 with plenty of time to spare. Just under six hours I believe.

I set a goal of coming in at under six and a half hours, just for something to focus on, as I was now dying a slow death of dehydration. It was around 90 degrees at that point, and I had a single sip of water left. As the minutes wore on, I felt sicker and sicker, groaning from the heat and thirst. I was still pushing out good power, and the wind was minimal, so I had no excuses, though I did coast a few times unnecessarily. I mainly made it through those last 20 minute by shaming myself for being weak and fragile and afraid of pain, and finally got through the Boulder city limit finish line in just under 6:24. At home, it took two hours before I could eat anything—I hadn’t been that dehydrated for years.

Next summer I plan to give this another crack. With some good fitness, better trail knowledge, and perfect wind conditions, I think I can go under six hours. Possibly under 5:45 if I’m in race shape. A huge shout out goes to Anton, who has helped pave the way for this super cool event, and who set a high bar earlier this summer.