I could say something deep and philosophical about how running rejuvenates my soul, provides me solace in times of need, or how it grants me spiritual enlightenment and allows me to see beauty in the world, but really I run because it is just plain fun. - Andy Anderson

Longs Peak (14,255'), in Rocky Mountain National Park, dominates the skyline in the northern Front Range area of Colorado. It has been a test piece for local athletes for decades, and there are many interesting & amazing FKTs on this magnificent peak!

Here are some of the main challenges that have emerged:

-Fastest time from the main Longs Peak trailhead by any route.

-Fastest time from the main trailhead sticking strictly to the standard Keyhole Route (the route used by the large majority of climbers).

-Fastest time for the Longs Duathlon from Boulder, which involves cycling 40 miles from Boulder and climbing the peak. Traditionally, Old Chicago restaurant at 11th & Pearl was used as the start/finish point for this, but more recently the Bustop bar at the north edge of town has become more standard.  Starting at the Bustop cuts off about 3 miles of cycling on busy Broadway each direction.  To be clear, Duathlon FKT aspirants should record their time RT from the Bustop.

-Fastest time for the Longs Duathlon in WINTER.

-Fastest time for the Longs Triathlon from Boulder, which is similar to the Duathlon, but requires climbing the technical Casual Route on the Diamond of Longs' East Face.  This article discusses some of the Duathlon & Triathlon trips.

-Fastest time for climbing Longs from Boulder entirely on foot!

Many times and tidbits on Longs are listed on Bill Wright's site.

A poster on our old website provide some additional historical FKTs:

Found in "Longs Peak: Its Story and a Climbing Guide" by Paul W. Nesbit (1963). It does not say by what route, although the book lists other FKT for other routes, so it is assumed by the old keyhole route.

There is also some interesting notes on number of times climbed: Shep Husted (350 times), Enos A. Mills (297 times), Carlyle Lamb (146 times), Alva Jones (120 times). [Note that Jim Detterline achieved an incredible 428 summits of Longs before his untimely passing in 2016.]

To run up and down Longs fast you have to love the place and be willing to spend the time to learn the name of every rock and foot placement along your chosen course. I did. Awash in a history of inspired performances, Longs Peak is a place that moves people to go a little beyond themselves, to punch through our self-defined envelopes. For me, it is a kind of holy place. To give credit where credit is due, the devoted people of the National Park Service have worked to keep the place much as it was 30 years ago. Today's warriors can have the biggest adventures of their lives on the same breathtaking stage. I love that. - Chris Reveley, August 2005

Editor's Note: Many Colorado 14ers should not be considered “backcountry” where you go anywhere you want; their popularity can create a plethora of braided social paths that lasts for decades in the fragile tundra.  So if there is a trail, please stay on it. Hundreds of volunteers with the Fourteeners Initiative work hard to protect our mountain environment.

Longs Peak is a special situation, as the FKT route does not follow the official trail. It does follow historic and still-existing trails, is legal and the route used by Rangers during rescues, once above timberline is on large boulders leaving no sign of passage, and is the route used by the earliest FKT efforts. 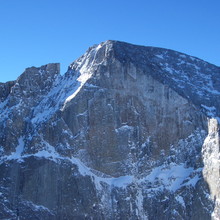 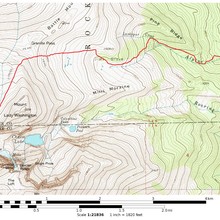 Could be interesting to put the first known Winter Duathlon trip on the leaderboard as any Longs Peak Duathlon in the Winter is friggin' hard - illustrated by the lack of many repeats.