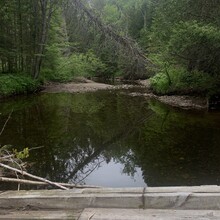 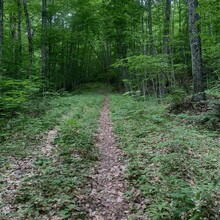 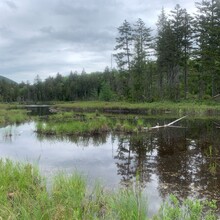 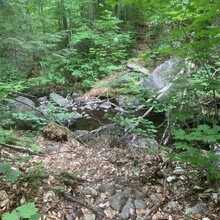 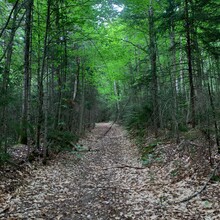 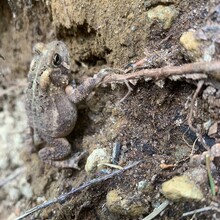 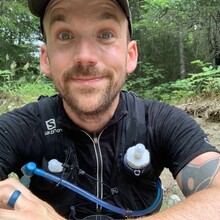 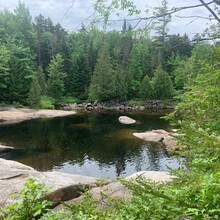 This was one hell of a just-short-of-50K trail loop!

The elevation is about as flat as you can hope for if you're doing an Adirondack long run, and when you do climb it's pretty fairly graded. The trails themselves... ehh, not so much.

Lots of un-runnable stretches of roots, rocks, and small stream or swamp crossings make it pretty impossible to settle into a "flow". And, at least for my attempt, a ton of overgrowth -- the first ~third of my (clockwise) loop was reasonably clear on Blueberry and Ward Brook, but after that it seemed like about half the time I was getting constantly whacked in the face, shins and forearms by a variety of bushes and branches.

Weather was perfect-ish for me in early June at least, low 60's and cloudy. I was happy to keep my feet out of the water the entire time, with just enough logs draped across the swamp crossing to (mile ~8) to allow me to tip-toe across. That swamp is probably enough reason for future runners/hikers to do this CCW rather than my direction -- better to get wet with 8 miles to go rather than 20+.

There were maybe a dozen or so Seward- and Seymour-bound hikers in the first 60-90 minutes, then basically no human contact until I was back within 3-4 miles of the parking lot at the end. I brought 2.5L of water/electrolytes and didn't need to refill and filter anywhere, but it would be easy enough to access the route's namesake Cold River if you needed or wanted to do so.