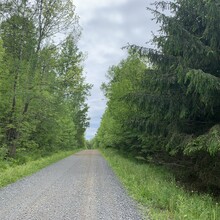 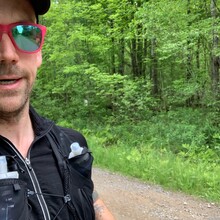 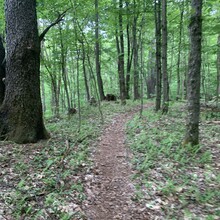 Super fun day out on the Winona trails!

I had a faster finish time in mind but lost a couple chunks of time here and there and faded in the last third -- a nice 11am start after a late-night scotch pour probably didn't help (though it was fairly mild temps all day), nor did some fallen trees and trail-wide puddles to carefully step around. I made some small routing mistakes and one medium-size one, took one crash, and had to stop and futz with my new vest/flasks setup... Your bread-and-butter long trail run hiccups.

Winona is pretty fairly graded for most of the course; going clockwise, the only real groaner (and walker) of a steep hill came at mile 20/21ish. I got a shout-out from a walker very early on that I was smart to run now (late May) before the deerflies arrived, which was certainly part of my planning/scheduling process! The route gives a nice mix of singletrack, ATV trails, dirt/gravel roads and a little bit of pavement, which I definitely appreciate on a longer run. And while the Wart Rd parking lot was surprisingly full when I arrived, I don't think I saw more than a dozen people in the next four hours -- lots of great solitude, just me and the trails.