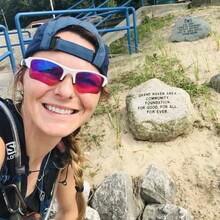 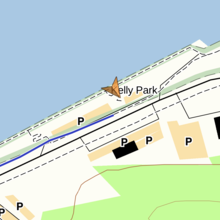 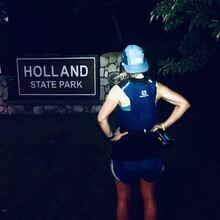 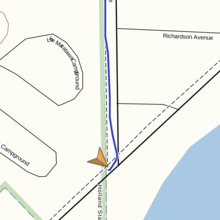 Ventured West in the mitten to find the Lakeshore Trail of Michigan. Was determined to complete a FKT attempt (running Southbound) as no woman has yet done so for this route. Did this unsupported - carried 2L of water with me for the effort along with a few gels. Started at Grand Haven State Park (specifically - at Kelly Park where there is a monument that I believe is a more easily reproducible starting/ending point - the .gpx route appeared to start here even though the prior postings say that the ending point is the Grand Haven State Park Sign). Passed by the Grand Haven State Park sign about 3.5 minutes later (which may be the official "end"/start - but I'd rather err on the side of covering extra ground as I followed the .gpx track from the FKT website) - and then covered the 21+ miles of this bike trail along Lakeshore Drive (thus covering this route from North to South, while prior FKT attempts may head the other direction). Pretty straightforward to navigate after getting out of Grand Haven - but had this on Gaia to confirm that I was following the route. Tagged the finish line at Holland State Park. Final distance was 21.67 in 3hr18min03sec. Stopped my Garmin and inReach there - but continued with my Strava app as I was eager to complete a full marathon for the day. Though I had finished the official FKT route unsupported (and logged only the official route on my Garmin) - I ran those extra 5ish miles with my husband John and got to catch a beautiful sunset off of Lake Michigan (which I captured fully on my Strava link here - https://www.strava.com/activities/3885423421). In terms of this route, easy to navigate as this is a paved bike trail. There are a few miles (~4-6) where they are reconstructing the trail/re-paving it, but it is fine to run on the dirt path and dodge the various tractors throughout. Feeling very grateful for my Nuun hydration and Picky Bars that kept me fueled. And loved sporting my new Team Trail Sisters hat for the day. Though this FKT route should not be confused with a "trail" run, it was a pleasant sneak preview to the various state parks that line the beautiful coast here. Here is to running to Holland!  #teamnuun #pickybarambadassador #teamtrailsisters #chasingunicorns