The Lakeshore Trail is a 20-mile paved bicycle path allows you to travel from Grand Haven State Park to Holland State Park on one continuous trail. The trail is a separate non-motorized path that runs parallel to Lakeshore Drive and offers many recreational opportunities along the way. Aside from the famous state parks at either end, the trail travels through three Ottawa County beach parks and natural areas: Rosy Mound Natural Area, Kirk Park and Tunnel Park. Along the route, the trail travels next to a ridge of rolling dunes surrounded by a protective canopy of trees in dense foliage. The FKT for this trail begins at the Holland State Park sign on Ottawa Beach Road and ends at the Grand Haven State Park sign on S. Harbor Drive. The paved pathway is 20 miles long from Holland State Park to Grand Haven, MI. There is a 1+ mile connector trail to reach Grand Haven State Park along S. Harbor Drive & Grand Avenue. 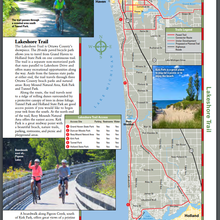 I'm attempting to set a FKT on this trail tomorrow morning at sunrise.  Wind is from the SSE, so I plan to start in Holland and run north to Grand Haven so as not to run into a headwind the whole way.  Running unsupported since it's "only" 21 miles.  Will post full report afterwards.  Strava link: https://www.strava.com/athletes/11509007

The Lakeshore Trail is a 21.1 mile trail that runs from Holland State Park to Grand Haven State Park mostly parallel to Lakeshore Drive and Lake Michigan.  The trail is paved and overall fairly flat but has some fun “up & down” sections rolling over the dunes that make me think of paved mountain bike trails.  I decided for Black Friday’s “opt outside” day that I’d establish the FKT for this route.

I started from the “Holland State Park” sign on the corner of Ottawa Beach Road and S. 168th Avenue at 7:52am.  The “real feel” temperature on this crisp Black Friday was 20 degrees.  Since it’s “only” 21 miles and temps were cool, I ran with only an 18oz hydration bottle of smart water and 5 gels.  I wore a Garmin Forerunner 235 on each wrist to ensure as much accuracy as possible.

My plan was to run a decently fast time but not race the trail.  I was hoping I could do sub 7:30/mile pace while keeping my heart rate under 150 bpm (essentially a MAF/base run).  Right out of the gate my heart rate was elevated.  It was weird seeing the difference in heart rate on both watches.  They are literally the same watch (one is new and on is two years old) and the heart rates were often 5-6 beats per minute different.

I decided to just screw heart rate and run for fun.  I took off and just tried to keep my mile times around 7:30/pace.  The trails elevation is nothing compared to hilly trails in Yankee Springs or Pinckney but it does have some sneaky little hills.  Lakeshore drive is fairly flat with gentle grades but the trail has some more traditional up and downs that slowed me on the ascent and bombed down the descent, it was a nice change up after expecting it to be flatter.

I had an alarm on my watch buzz every 25 minutes and I ate a gel.  In theory, if most people can digest 240 calories of carbs an hour, this would ensure I had the maximum amount of digestible energy without having excess food in my stomach.  I ate 500 calories of Reese’s Puffs cereal for breakfast and then had a banana and McDonalds hash brown about 30 minutes before starting.  If you’ve never had a ripe banana and hash brown together, it’s an interesting experienced.  I burped a few times the first few miles and the taste in my mouth of banana flavored grease potatoes was a little shocking.

After 4 miles and my first gel, I picked up the pace from 7:30ish a mile to 7:20 a mile.  Around 7.5 miles in, I had a shoelace come untied and I had to take off my gloves to tie it.  I accidentally stopped the watch on my left hand which was my watch that connects to my Strava.  The “total elapsed time” on my Garmin Connect was 8 seconds more than on Strava which is also what my Garmin on the right hand showed.  So, the FKT is actually 8 seconds longer than the Strava segment I created for this route.

I was feeling good 11-12 miles in and decided to get under 1:37 for my half marathon split.  That required a sub 7 mile for mile 13, so I picked it up a bit and felt really good.  My plan was to relax a bit in the 7:20ish pace range and then try and break 20 minutes for the final 5k.  I ended up pushing it a little bit and didn’t quite have the gas the last 5k.  There is also a dune you have to climb to get to the beach for the final half mile straight-a-way and that sucked the life out of me.  I felt like I was going in slow motion and my 2nd mile of the final 5k was 7:05 and I ended up with a 21 minute final 5k.

I kept pushing at tempo pace and finished right at 2:33:36.  The Grand Haven State Park sign is on S. Harbor Drive just north of Emmet St.  My Strava will show 2:33:28 for moving time due to the 8 second accidental pause.  I’m attaching the Garmin Connect data to accurately show the time of 2:33:36.  The route according to my GPS is 21.09 miles long and 21.11 miles long according to my dad’s GPS watch.  I’m fairly happy with the 7:16.9/mile pace splits considering I took the first 4 miles easy, didn’t push past a light tempo pace at any point and it was in the 20’s with some wind.

This is a really cool 21 mile route that connects to iconic lake Michigan state parks. I hope that in the future this trail becomes a more competitive FKT.  It’s just short enough for marathoners to use as a long run, in fact the Holland-Haven marathon uses a good portion of the course.  All in all it was a good #OptOutside option for Black Friday and helped burn off the copious amounts of apple pie from yesterday.