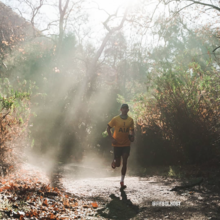 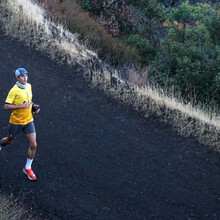 Appreciative to have gotten the FKT and under an hour for this route! A spectacular 9.58 mile route that gifts the runner a serious climb, panoramic views of Los Angeles, and tree-covered canyons. For this attempt, my shoe of choice was the Adidas Adios Pro (the reason behind this over a trail shoe is that most of the trail is on fire road) and I carried a handheld water bottle from Nathan Sports.

The week leading up to this FKT was a great one for my trail running training. It started with a moderate effort starting at Los Leones and heading up to Eagle Rock in Topanga State Park and back for a total of 15.5 miles. The next day I decided to scout more of the Backbone Trail and got 10.5 miles in on the section between Kanan Dume and Encinal Canyon. I then scouted this FKT route (plus some extra credit) for 17 miles followed by another long run the next day in Will Rogers State Park for 15.5 miles. The day before this FKT attempt I went for a 4 mile hike that served as some well-needed active recovery

My attempt started at sunrise and it proved to be a perfect time with temperatures at 50ish degrees. I went out at a relatively easy effort knowing 0.7 miles in on the course is the start of the GOAT trail that connects you from Sullivan Canyon to Mandeville. The goat trail is roughly 0.4 miles and is a daunting vertical gain of ~550 ft. My goal on this section was to always be moving and power hike the steeper sections. I estimate that I power hiked 20% of this climb and the rest was my best attempt at a jog. Once the goat trail popped me out onto Mandeville I was a little exhausted and the calves were feeling the climb. I tried to put this in the back of my mind and stormed away hoping the turnover would slowly come to me. 0.4 miles later (the 1.5 mile mark of the course) I began to get in a rhythm on the slight incline that is Mandeville Canyon. The fireroad of Mandeville is mostly uphill but the trail does reward you with some downhill every so often. My mindset on this stretch, up to the Nike Missile Tower, was to push a little more than I thought I could on the uphills knowing I had some downhills that I would treat as my recovery periods where I would still be running quick but could give my legs a little break and also get a swig of water. Once I reached the top of the climb I took the left onto Muhallond Drive and knew this is where I would excel on the course with residual leg speed from many collegiate track sessions. From the Nike Gate to the bottom of Sullivan Canyon is 5.19 miles and I was able to run 26:36 for this stretch, hitting a 14:56 5k split in the middle of it! And if this attempt wasn’t masochistic enough… to conclude the FKT  loop and get to the Sullivan Canyon Gate, there is a 0.2 mile asphalt climb that is absolutely brutal after the descent in Sullivan Canyon. Anyways, I was happy to go under an hour for this route recording a time of 59m 30s.

I was surprised to see so few FKT attempts on this beautiful route (and many of the FKT routes in the Los Angeles area). My hope is that this attempt, and future attempts of mine, invigorates local, and non-local, trail runners to rip some quick miles on the underappreciated trails of Los Angeles. There are some amazing trails here in LA! Let’s get after it people!!