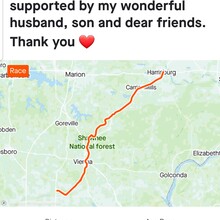 Ran the out and back on the Tunnel Hill Trail.   Starting in Harrisburg running to the end at the Nature Center then back to Harrisburg Illinois.  Supported run. The FKT was recorded on my Coros Apex watch and loaded to Strava. The run started Sunday April 25th 2021 and ended Monday April 26th 2021. I had friends run with me for part of the run. My friend Jim ran 5 miles with me. Michael  Eriks ran 2 miles with me. Lindsey Roberts ran 10 miles with me along with Brittany Lalicker.  I had 2 drop bags on the course at Vienna and Tunnel Hill trail heads. Time of 24:49 with a total distance just over 97 miles. I got water at all the trail heads except Carrier Mills as the water is turned off.

I don't really know how to explain it....But it usually starts out something like this....Do you want to run really far, without sleep and good meals?  Then you ask select friends and family members that will support your idea...you know the ones...we all have them. Thankfully!

So a FKT attempt on the Tunnel Hill trail was the plan.  It would be an out back. So approximately 95-97 miles on a familiar trail with a few friends and family for support. Piece of cake right???

Fast forward and I'm getting out of my car. I started on a Sunday morning as the weather looked the most favorable that day.  My pack was full of Luna and Dan's bars, gels and two small bottles of Tailwind. Also a new thing of mace, just in case. I wasnt exactly feeling it as I started down the trail. Seriously I just wanted to go back home. But I didn't. My pace was slow and I was fighting battles in my head at mile two. At 7 miles in, I came into Carrier Mills only to find two large dogs blocking the trail. The larger dog was holding a deer leg in his mouth and they were growling loudly. I fumbled for my mace and quickly remember I never have had to use it. And maybe should have read the directions. I stopped. They stopped. I walked. They walked. After several minutes they headed off the trail with their deer leg. I was happy it ended without any confrontation.  I convinced myself I wasn't going to finish. So I called the Morgans and told them not to meet me. I imagine they thought I was nuts. But they were incredibly kind and supportive. They are my tribe. Around mile 24 Mike met me for about a mile run and left a drop bag for me at Tunnel Hill Trailhead.  He reminded me it was a beautiful day to be running. Things were feeling better and it was a lovely day. I ate a bagel and had some Diet Coke. It always feels good running from the Tunnel down to Vienna. It's a little down hill and I always feel faster.  And certainly the hill feels like a mountain on the way back. Funny how that works. About 3 miles from Vienna my friend Katherine Mueller and her hubby showed up to say hello. Such a blessing to have friends like this. Okay. I wanted to still be in a bad mood and stop my run. But I couldn't. And with that my friend Jim came running up the trail with his puppy, Harley.  Into Vienna we went and I  got food and water. Mike had left my other drop bag there, so I restocked my pack and we headed out. Great company and conversation and the next 5 miles passed quickly. We were warned about a large snake on the trail. We didn't see that one. But Jim and Harley had quite the eventful experience trying to avoid a non poisonous scared snake on their way back.  I won't tell that story..Jim tells it epicly better!

Keeping the voices in my head in check I was closing in on Karnak TH when Mike and Logan met me with a grilled cheese and soda. I was happy to talk to them about non running things. And get some hugs and kisses. Running up the cows near Belknap were on the wrong side of the fence and lounging on the trail. I never realize how big cows are until you are right next to one. They seemed unimpressed by my FKT attempt and kept eating. Logan and Mike met me again at Karnak just to say hi. It was a nice send off to the Nature Center and turnaround. For some reason that section always seems so long. I had my light, plenty of food and pressed on. The push back to Vienna would be a great milestone. Getting there I was so happy to see Morgan Jennings . She had some food for me and sadly had  ran the wrong direction on the trail but waited for me at the trailhead to help. Once again...these are the friends you need. The other Morgan was a texting queen. Checking on me and sending words of encouragement all day and night! The sun was gradually setting and the bright full moon was rising. I was a little nervous being along at night. But the call to adventure thankfully trumped that feeling. The next almost 10 miles I was going to be alone, in the dark. No aid stations. No other runners. Just me and all monsters, zombies and giant spiders that come out at night🤪

I had on a skirt, short sleeves and a light jacket. So I was cold and shivering by the time I reached Tunnel.  Thankfully I would have warm clothes, food and my awesome friends Lindsey Godby Roberts and Brittany Lalicker would be there. When I arrived I put on everything I had in my bag. I restocked my pack and with that the girls arrived. I was still cold so Lindsey gave me her sweatshirt,  headband and a pep talk. She is awesome like that. Brittany is the kind of human that always is smiling and happy. It is impossible to be down when she is around. So off we went. I had them for the next 10 miles. I think sometimes we make the assumption that everyone else's life is perfect except yours.  But that's just not true. We all have baggage. It's just how we carry it that makes the difference. We laughed and talked.

We saw cute bunny rabbits and lots of dogs.

The miles were slow. But they never complained.  Coming into the trailhead where they would leave we were passed by a gentleman on a bike. And while it seemed perfectly normal that we were out there for a run, seeing him made us uneasy. My spidey senses were tingling.   We saw his light loop around back towards us.  So when the girls got to their truck they drove up the trail to make sure I was okay. The guy on the bike was sitting on the trail as I went by him. He tried to talk to me but I just mumbled and kept moving. At that moment Mike called me and l told him what was happening and he stayed on the phone with me. I only had 14ish miles to the finish. It was 230am and about 83 miles into my run and I was depleted.  But with this all happening my heart raced. The girls met me at the next road. They needed to go and I didn't see the light from the bike guy behind me any more. I turned off my light. I thought if I needed to check around or behind he won't know I was looking out for him. The moon was magnificent and bright so i could see the trail. I was sorta happy it was cold since that would keep the snakes off the trail. I was closing in on Carrier Mills the last trailhead before the finish when a light showed up and was headed towards me. I had a plan. I was gonna mace this guy if he got off his bike. There is no place to go to and I wasnt going to leave the trail. I slowed way down and steadied myself for whatever was going to happen. The light seemed brighter but I was amped on adrenalin. The guy on bike pulled up and said, hey there beautiful.  It was go time. But as he leaned in I realized it was Mike!! I almost collapsed.  I couldn't wrap my head around the fact he was there.  On Logans bike. At 3am, somewhere between Stonefort and Carrier Mills. We laughed at the obvious fact that I almost maced him. But he's always been my favorite stalker. A wave of relief washed over me. Now I was so tired and so cold. Mike stayed with me until Carrier Mills where I got a change of shoes and quick 20 minute nap and his sweatshirt. I'm pretty sure I had on 8 layers at this point.  He followed me out of Carrier Mills for almost a mile then headed back to his car. It was 440am and the sun would be coming up soon.  The last miles were hard. But so were the first ones. So just keep going.  Finishing I was a blessing. Definitely there is a lot a room for improvement on time. But will save that for another day.