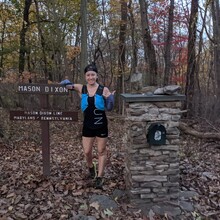 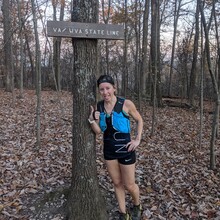 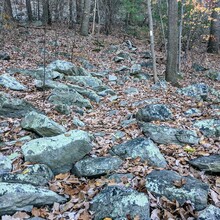 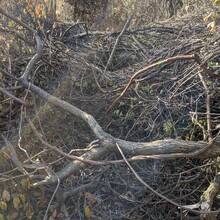 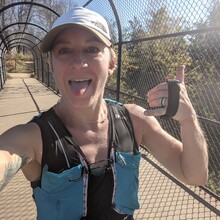 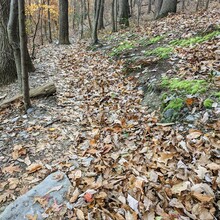 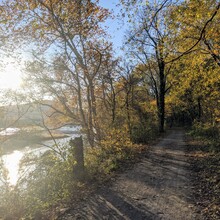 Holy leaves batman! I knew in advance that the leaf-fall on the trail was bad, but it was worse than I expected!

I drove myself up to PenMar park from my home near Hagerstown. It was still pretty dark when I arrived, so I took my time getting ready. I carried a hydration pack with 1.5L of water, a handheld pepper spray, a ziplock baggie with extra Nuun Hydration tablets, and my cell phone. The temp was in the low 40s to start.

Jogged down to the Mason Dixon line - there were two hikers there getting ready to start the same route. They took my picture, and then I took off right at 6:30am!

Miles 2-3 were pretty gnarly with the rocks and heavy leaf fall, but I expected that, and hoped it would get better once I got through it. Instead, I found that ALL of the most technical sections, from start to finish, were clogged with leaves. There were a lot of sections that are normally runnable, that you just couldn't see what you were stepping on, and I slowed down significantly on those.

As I got closer to the Thurston Griggs trail, there was more hiker traffic, and the leaves had been pretty well beaten down. I was able to get into a better groove for about 10 miles in that touristy stretch.

At Washington Monument State Park, I used the water pump on the trail to refill a full 1.5L in my hydration pack. I had plenty of water in the cooler morning temperatures until this point, but the day was warming up fast and I was covered in salt already.

I had to hike most of the section up South Mountain with bad leaves, but was able to slow-run the rest of the trek to Gathland State Park. I used the water pump on the trail at the park to refill 1.5L of water again - I had already used most of what I had from the Washington Monument. Originally I didn't think I would need a refill here, but temps were about 75 degrees by then, and I knew I'd be in bad shape if I ran out of water.

The next 7 miles from Gathland to Weaverton were tough. The leaves were heavy for most of that segment, my legs were tired of trudging through them... any time I could run I felt good, but I was so sick of hiking and stomping. This was my slowest stretch of the whole day.

Weaverton Cliffs was crowded, and I irritated a lot of hikers by asking to go around - but by the time I got down from the switchbacks, I was ready to get MOVING! The trail down to the canal was relatively clear, it felt good to run, and my body took off once I hit the canal. So happy to be in the home stretch and free of the leaves, I hit 8:40-50 pace for all of those canal miles.

Harper's Ferry was a crowded mess on a warm Saturday evening, and I'm sure I irritated a lot of people by trying to run through the bridge and the town. But, I felt great, and I wanted to beat the sunset, so I ran most of that segment until I got to the bottom of the trail across the Shenandoah.

Holy Moly, those last two miles to the finish are tough! I called my husband while I hiked to let him know I was almost done, and he informed me that he and my kids were waiting at the Finish Line! AWESOME - something to work for in this last stretch! I think I ran about 1/4mi of those last two miles, it was hard! But I got there, with an hour to spare on the existing FKT, and about 5minutes until sunset! Temperatures had cooled in the last hour, and I still had about 1/4 of my water left in my hydration pack for the hike back out to Harper's Ferry. (Which was very slow, and eventually dark.)

All in all, I finished about an hour slower than I intended. This time can definitely be beaten once the leaves breakdown and clear. The best time to run this route is early Spring or Early Fall, and I won't make the mistake of running it again after the leaves have dropped!

I was also pleasantly surprised at how do-able this was Unsupported, and I hope more ladies give it a go! Even on a warm day, with the water pumps turned on, hydration was not a problem, and aid stations weren't needed! I don't usually eat food for these kind of distances, so I didn't have to carry a lot of extra things, but it would be easy enough to carry some small snacks if needed. The bigger hurdle for me was running completely alone, but I was pleasantly surprised at how comfortable and confident I felt the whole way. Maybe all those leaves just kept me distracted from worrying about it! It was fun, and maybe I'll go back and give this another go in a better season!