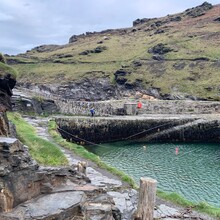 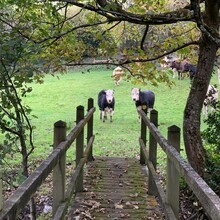 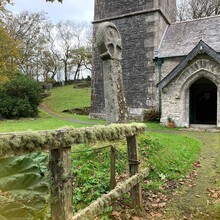 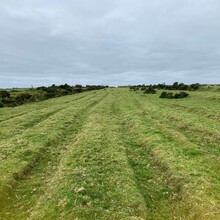 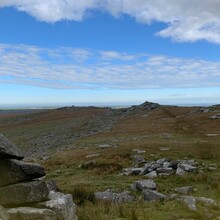 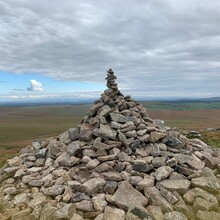 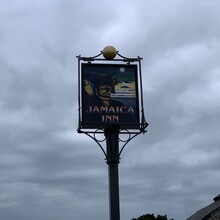 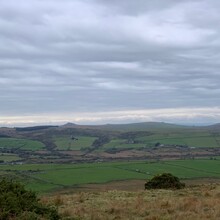 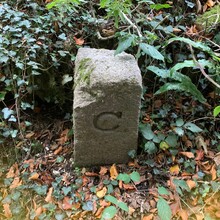 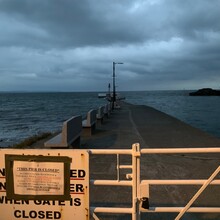 I had been planning to do this route for 3 weeks now when I found it on this site that gave me extra motivation.

The harbour in Boscastle was picturesque as normal and at 8:42am I started my run to Looe, The weather was overcast and cool.

Then starts the uphill, and uphill and more uphill. This is broken up with nice views and items, like the very mossy bridge with the stone cattle grid.

Once you reach the top, the run across the runways of the airfield with Rough Tor in the distance and the big sky surrounding you, really made me realise of the challenge ahead of me.

Climbing the Tors was great and the weather was great and I took a bit of time to enjoy the views.  The run down Rough Tor towards Brown Willy was intense underfoot and I needed to be extremely aware where I was about to put my feet.

The climb up Brown Willy was longer than it looked, but the steep bit at the end on this route was so much more fun than the main path looked. Down the other side was enjoyable and lead to some nice bogs, I thought I was doing well until half way though and one grabbed my foot and I ended up falling into the boggy mud in front of me, All part of the fun :-)

After all the bogs and another small tor, interesting old droves lead to the pub.  The Jamaica Inn, no beer for me though and straight past and on to the reservoir and another Tor then marshland, hard to run with tufts of grass and holes.

The second half was mainly forests and rivers with some road in between. I love the quality of air in areas like this, running is great, nice and undulating, with a few hills.

After a good few miles of down hill running you enter the forest just out side Looe, Firstly I was presented by the footpath completely flooded by the lake next to it, was this the right way?

When I got to Looe there was many locked gate and closed roads along the route which added a big of extra navigation to the route, though the winding streets, heading towards the “Pier” and the finish of what was a really great adventure across Cornwall.

The “Pier” was closed for safety reasons, it looks like it had been damaged at the end so You can’t actually go on it, but I had made it to the and had had a really enjoyable day.

I had a very full race pack. I used nuts and fruit, sweets and gels as food and started with 4 litres of fluids in my pack, I also took all the standard safety kit and a change of clothes. This made the pack nice a heavy a about 6.5kg on start. I was fully self sufficient and didn’t stop for any resupplies or assistance. I made sure this was fully unsupported.