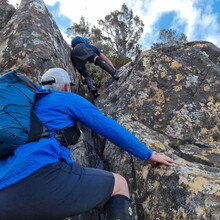 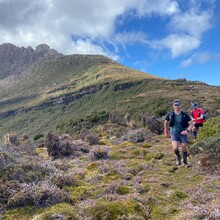 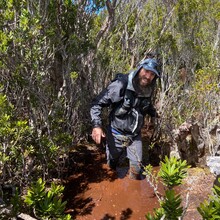 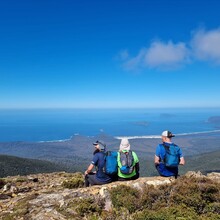 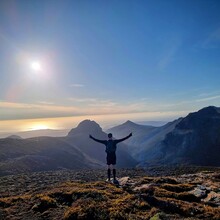 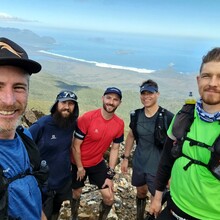 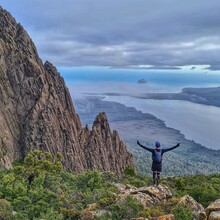 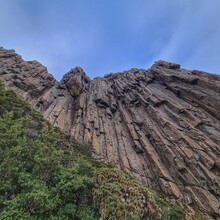 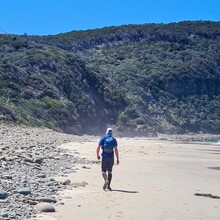 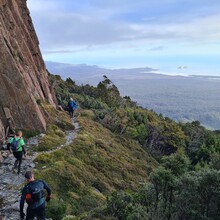 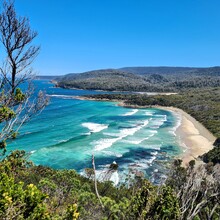 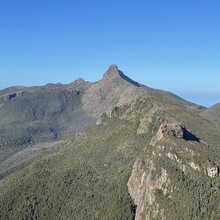 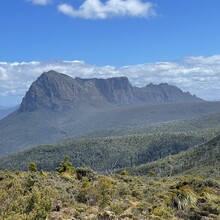 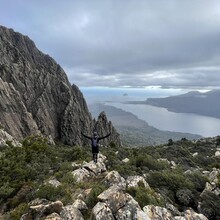 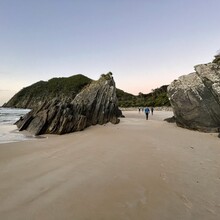 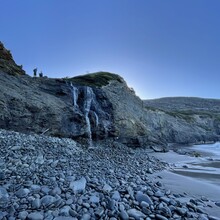 Precipitous Bluff is the jewel in the crown of the Southern Ranges in the deep Southwestern Wilderness area of Tasmania. PB as it is known stands proud at the western edge of the ranges before falling mightily down to new River Lagoon. The sheer vastness of the cliffs jutting from near sea level to its mighty peak have captured the imagination of adventurers to this area for generations.

The Southern ranges-precipitous bluff-south coast circuit is considered a 9-10 day bushwalk and our objective was to complete the entire circuit in one push without stopping.

The track starts out reasonably well made through the old Ida bay railway area as it snakes up towards Hill One initially, and then on to Moonlight Ridge at approximately 700 metres high. Along the ridge there are options to take in the Hippo which adds another few hours to the journey but provides excellent views down to the south coast and west across the range to PB. The track we took continued on and passed Mount La Perouse (we did not summit on this occasion) as we made our way towards Pindars Peak. Pindars peak summit is an additional clamber over some interesting rocks and probably adds a further hour to the trip(this was bypassed as well, we had a long journey ahead).

The track to this point is in a reasonable condition for a wilderness track with sections of Scorparia and mud but otherwise typical of the sort of track you will find around much of Tasmania in the more remote areas. At this time of year there are ample opportunities to collect water along the track to Pindars however these opportunities are more limited from Pindars on. We took the approach of filling up with water at each opportunity we could, understanding that the most reliable source of water was at the PB Base Camp. This approach worked given the warm conditions we experienced but would be sensible at most times of year.

The track from Pindars through to PB base Camp can only be described as extremely challenging, some of the thickest and most impenetrable scrub bashing you are likely to find in Tasmania. The conditions are unrelenting and should not be contemplated lightly, careful consideration of clothing and equipment is paramount and even still expect to be scratched and lacerated from the Scorparia with sodden and mud caked feet and legs.

When we arrived at PB Base Camp we were overcome by the majesty and power of PB which was not immediately in front of us. The climb up PB is reasonably well marked and although there is quite a bit of physical hands and legs climbing, it was a welcome reprieve from the scrub bashing that proceeded us for the previous seven hours.

Climbing PB was amazing, the power and presence of the mountain could be felt in every step, every hand hold. PB stands timeless, as it has been for thousands of years, observing everything that comes before it, weather, people animals and time. The track to the summit of PB is poorly marked but can intuitively be deduced and once on it has a reasonable number of cairns to guide you in the right direction. Once on the summit the view down on to new river Lagoon and across to the Iron Bound Range and beyond is amazing.

The first part of the descent is reasonably well made and the track easily identifiable. The iconic dolerite pillars frame the lagoon down below. Some parts required down climbing but they are nothing to dangerous and most able adventurers should be able to traverse without too much trouble. Pieces of coloured tape are periodically tied to trees in the early parts of the decent but after that it is extremely difficult to navigate. Our GPX file indicates the challenges we had, and it would be advisable to look for other GPX files potentially of others who have traversed from New Lagoon up to better orient for future expeditions, We started this section with fading light and took extreme care on the way down to new river lagoon, this area has some serious sinkholes!

Once at new river Lagoon there is a 7km wade to get through to the South Coast Track. Fortunately for us we encountered a low tide as we were undertaking the wading through the night by headtorch. There are some inflows to the lagoon from various creeks and other tributaries that required us to go up stream to be able to get across as they tended to make the water to deep to cross at the mouth without swimming.

The south coast track is largely unremarkable by night, but the clear tracks were a welcome relief from the track we encountered from Pindars peak onwards. The track from new river Lagoon for the first few hours is very well maintained and clear and was largely dry under foot. The next point of interest is Granite Beach. The beach is a mix of rocks and some sand and at the end of the beach was an interesting waterfall that spills out over the landmass on the rocks below before flowing into the sea.  From here there was some more more climbing to do up and over the South Coast Range. This is where the track condition deteriorates significantly, and we were back to deep mud and overgrown track.

From the top of the range the views are quite spectacular right back out over the south coast from where we had come, the Iron bound range off in the distance.  We made our way down through the mud and found our way first to Lion Rock beach and then eventually to South Coast Bay. This was familiar territory, where many of us had surfed before and we knew the track out once up over the first climb was relatively straight forward and largely duckboards! The fatigue was starting to show, with some of the party starting to visualise things that may or may not have been real! we had now been pushing for more than 30 hours and except for one lone walker we met after Granite beach we had not seen anyone until Lion Rock.

From Lion Rock beach back to Cockle creek the track is largely duck board and reasonably well maintained. It does get hot through that area in full sun due to the topography of the area, so adequate sun protection is necessary, particularly in summer and hot sunny days. At Cockle Creek there is a sign in booth and other amenities. There's also a very well established camping area and rangers accommodation.  The highlight of course is of the route is standing atop PB but also reaching the end and enjoying a dip in the freezing waters of the many white sand beaches of Cockle Creek.

Definitely an adventure with all the types of fun!