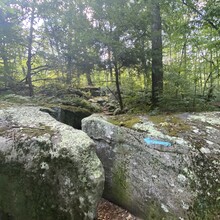 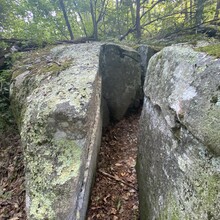 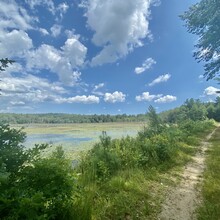 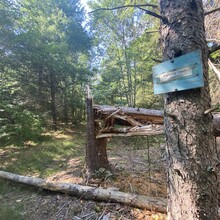 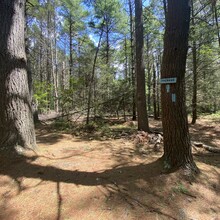 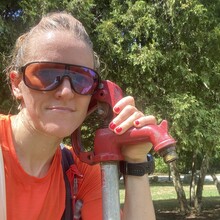 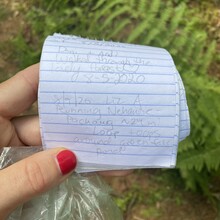 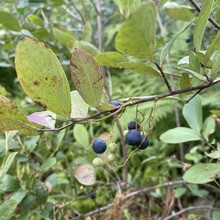 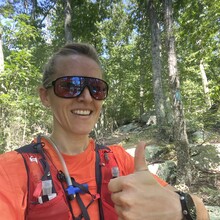 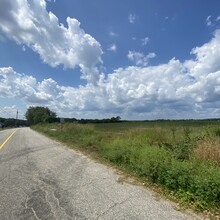 I am terrible at planning, and despite wanting to do this loop for some time now, I decided to do this "day of." Not only that, I started at 9:30, which meant I had already wasted much of the day's cooler temps. I decided to park in the small fishing lot across from the Beach Pond boat launch lot, which is shady almost all day, but people park like idiots there (see below). I parked there because we are in the middle of a drought, and I knew that my only chance of water would be just off the trail at Pachaug State Forest's camping area where there's a well pump in the middle of a field (~1/8 mile off the trail). I carried a 2 L bladder and two 0.5 L soft flasks.

I did the route clockwise so that I could get the road section of 165 out of the way early. No sooner had I gotten off 165 and onto a jeep road, I got distracted by some dirt bikers and ran past the first turn onto singletrack. I realized pretty quickly, turned around and got back on course. I wish I could say that was only mistake (I just ran the full Pachaug trail a few weeks ago, so one might think this would be easy). As I came into the Green Falls Pond area, I missed another turn and stayed on the Green Falls Pond loop, which connects to the Narragansett trail (also blue blaze). More than halfway around the pond, I realized my mistake. Rather then turn around, I decided to complete the pond loop, run back to where I missed the turn, and then carry on from there.

Things went fairly well from Green Falls to the Pachaug camping area. There were some blow-downs from hurricane Isaias, but far fewer than I expected given how many people in CT still remained without power after 4+ days. I almost missed the turn-off for the well pump and had to back track a bit, but it was well worth it. The water was ice cold and refreshing. I put my head underneath it, washed my face, filled up my bladder mixed up some tailwind in my soft flasks, and got back on my way.

At this point, it was getting pretty warm out (~84°F). For some reason, I had it in my head that this loop was 24 miles, but it clearly states on the FKT site that it's 27 miles, so I don't really know what I was thinking. I knew the Green Falls loop had added about 2 miles, so I was expecting to do about 26. However, as I neared the section of the Pachaug trail that I'm most familiar with, I realized I would likely be finishing at around 29 miles. The last 4-5 miles alternate between soft, pine-needle strewn, rooty singleltrack and hiking sections filled with boulders and occasional steep, rocky climbs.

Needless to say, I was happy to get back to my car. However, I came back to find that a row of cars were double-parked in front of mine. I wasn't surprised about this because I'd heard this was happening at this lot (just didn't believe people were actually that dumb). I refrained from writing some choice words in Sharpie across the side panel of the Toyota Tacoma parked directly in front of me, and instead, I made nice with a lady who was swimming nearby. She was parked next to the Toyota, and by moving her car, I was able to wiggle my car out of the spot.