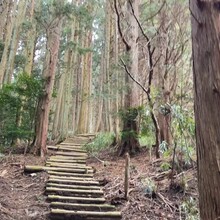 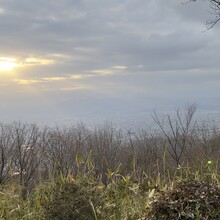 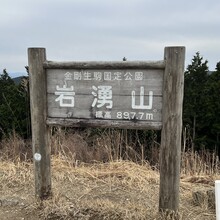 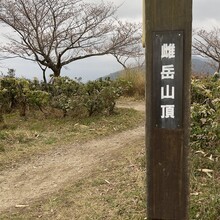 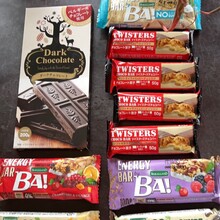 I started by driving my honda grom six hours to the course the day before I planned to do the Diamond Trail. This might have been my first mistake because I didn't anticipate what being in a compact position, squeezing the tank of my bike for six hours would do to my muscles because 16.5km into the run I got double groin cramps, something I've never had before and then a minute later both my hamstrings cramped up something that also has never happened before. They never went away. Every time I went uphill that tightness was there, on both legs, my lower inner thigh and hamstring were painfully working against me with every step on a stair or incline. Overall my strategy was to power hike all the inclines and run everything else. The downhills on the Diamond Trail were steep and mostly consisted of going down steps. The second mistake was not paying close enough attention to the GPS course on my watch. This trail was sometimes really good with signposts and sometimes nonexistent in the places you needed them most. There are dozens of side trails (escape routes) and even looking at my Garmin map with the course drawn out for me, the course did not always want to match up with the trails displayed on my watch and there were a few instances where there were three trails all going in the same direction with no signs and I was looking at my watch and that red course trail matched up to none of them, so it was a guess, and I guessed wrong because a few minutes later the course autocorrected, snapped back onto the appropriate trail and told me I was on the off course and had to backtrack. This happened two more times, that first time cost me a couple of minutes at most, the next two times I learned my lesson I stopped double-checked my watch then continued, the fourth time I came to a section with multiple trails and a forest road but I got no notification from my Garmin, if you set your Garmin to follow a course, it will buzz and let you know a turn is coming up, it can be a really useful feature. I didn't notice any buzzing or see any signs that say the Diamond Trail is this way so I kept going straight down the path I was on. When you get off course with your Garmin watch it will let you know by buzzing and telling you you are off course. It will keep going off and it can be annoying because it will sometimes do this when you are on course and it thinks you are off course. I ended up running about 6-700 meters off course without my watch ever going off before I realized I was going the wrong way because the trail just disappeared, I checked my Garmin and realized what happened, and I had to turn around. Completely my fault but a good chunk of lost time.

Trail: This isn't a very scenic trail in my opinion. It's just a trail that connects a few interesting things that require time to stop and walk around to actually discover why those places are interesting. This trail just happens to connect all of them along a rugged terrain which is quite impressive. If you want a trail where you can enjoy the views from the tops of mountains, this trail is not for you. 99% of the trail is surrounded by trees, beautiful trees, but still just trees. When you do get to the top of the few grassy mountain plateaus the view from the trail was mostly non-existent and requires you to go off-course and look around, of course, I did that a little bit. There are a few shrines and temples but it's mostly the same case as the mountain views, some you can see, some require a little detour. Who this trail is for are people who like stairs lots of stairs. As I was doing research for this trail I found some people used the Japanese word 階段祭り (kaidan matsuri) which means stairs festival and is used to talk about when there are lots of stairs. Seriously there are lots of stairs and all kinds of them. It is said to be the hardest trail in Kansai, I can't speak from the experience of trying other trails in Kansai but I can believe it. I think the photos of the trail make it seem more interesting than it really is but I enjoyed the challenge of it.

I took all my food which came in bars into bite-size pieces and split them evenly into two bags and put one bag into my shoulder pocket on my Salomon Agile 12. This way I did not have to worry about messing with any garbage except for the two bags used to hold my food. It was reachable but difficult to get my hand in the pouch and pull out the pieces. The next time I do an FKT like this I will get/make something that can attach and sit in-between my shoulder straps that's easy for me to reach my hand into and I can dedicate both shoulder pouches to hydration. For hydration, I brought four 500ml soft flasks, three filled with 70 grams of my electrolyte-carb drink mix so not quite 2L. I knew I could make it the 38km to the one part of the course where there would be drinkable water but I was hoping it wouldn't come to that. I did find a stream of water right after Mizukoshi Pass about 16.5km in and used it to rehydrate and refill a water bottle because at this point is when I got my first cramp and I was thinking it might be because I was dehydrated. Up until that point I have been eating and drinking consistently but only ever tiny amounts and my stomach felt great. Right after the stream where I drank one and a half flasks of water I felt my stomach change, it didn't get uncomfortable but I could tell that the consistent and smaller food and drinks were the way to keep the stomach optimal and try to not put myself in a position where I need to drink a bunch of water at once because I didn't carry enough or know where I could refill. I ended up finding another small stream to refill water and I never even noticed the place that was marked on my map, I walked right by it but I was fine on water. I was pretty satisfied with my food choices except for the dark chocolate. It's very calorie-dense but I think 100g or less would have been better and replace it with more of the Ba Energy Bars if I indeed ate all my food which I didn't... I ended up finishing the first bag of food around kilometer 37 and when I got around to opening the second bag I was too lazy to try to fit the bag of food in the shoulder pouch. So I poked a hole in the bag and grabbed two or three pieces ate those and didn't eat again until after I finished. I definitely could have eaten more and I had no stomach issues at all but I simply choose to not eat, I'm not sure if it affected me negatively I was mentally fatigued but I felt my slowdown at the end was more due to durability, not lack of food but my stomach was doing great and more food probably would have helped even though I didn't feel hungry or low energy.