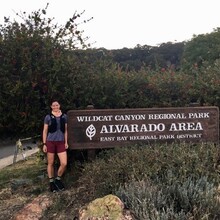 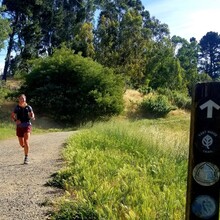 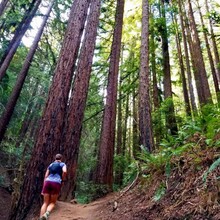 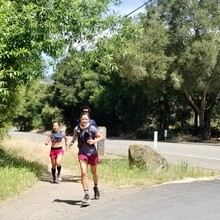 Started early – 5:51 am – to beat the heat. I selected this date weeks ago to be able to structure preparatory training and recruit the support of a few friends. Turns out today was a mild heat wave with the hottest temperatures of the week – 80 degrees and sunny by the time I ran the exposed part through Chabot. I have a habit of hot races, even though I am decidedly not a hot weather person! I have got to stop doing that.

Anyway, back to the morning. I ran the first 10 miles alone. Those Wildcat trails are beautiful, especially in early morning light – I’ll be spending more time there in the future. Between Alvarado and Inspiration Point, I saw a coyote and got run off the trail by cows. I ended up have to seriously bushwhack through gorse for a few hundred meters to get past the cows. I really wish they would remove the cows, as this is a frequent occurrence when I run there. How about some goats instead?

Then came Seaview up from Nimitz. That trail is one of my Tilden nemeses. But today wasn’t too bad – I climbed well and felt patient. It was joyful to meet Laura and Shane at Steam Trains for a hydration resupply, and Rachael surprised me by biking up to cheer for me (so early! what a champ).

The section between Steam Trains and Skyline felt fantastic. Laura’s company was great. And in particular, the climb from Fish Ranch to Sibley really clicked – I ran most of it, and in doing so surprised myself. Then I picked up Pamela at Skyline to get through the French trail rollers. Ooof. Beautiful but ravaging. I struggled to know whether to run or hike for much of the elevation gain in that section. But I did see Richie and Owen who made an appearance to cheer, which buoyed my spirit for a few miles!

Ashley and Peter met me at MacDonald for another pit stop, and then Ashley motivated me up the 600-ft climb into Chabot. I really started to feel the accumulated miles at that point. My hips were getting super tight, my hamstrings were worked, and the heat was setting in. I transitioned to full liquid nutrition at about 18 miles, which will be my MO going forward. I prefer to drink my calories, even though cherry lime Roctane gels are superb.

The last 8 miles through Chabot were rough. The heat and exposure got to me, and because it was not a race, I struggled to push myself and get calories and fluid in. I hiked a lot of inclines I probably should have run and lost ~10 min as a result. Oh well! I did this because it sounded like fun, not because I wanted to crush my soul. In particular, Brandon trail was not my favorite. It’s not particularly scenic, it’s only kind of runnable (and only if you’re motivated to run it), and it’s dry and sunny.

The descent to finish was great. And it made me feel so loved to had friends (my pod!) cheering at the end, on a weekday they took off from work for this FKT madness.

My GPS dropped early for about a half a mile, which is illustrated by the oddly straight line at the north end of the route file and the shocking mile split. While my GPS was misbehaving, I ran through the Wildcat parking lot and onto Wildcat Creek trail before hopping onto Belgium trail (a true gem of a dirt road). That’s really the only way to move through that area, anyway.

Because all the water sources are shut off in the hills right now, I decided to run supported. My crew supplied water at Steam Trains and MacDonald and ran with me for segments of the course for moral support and the chance to catch up! I’m a serious sweater - I tend to need 24 oz per hour - so carrying six hours of water from the beginning was not going to be realistic. Otherwise, I carried everything I consumed (and then some).

With cooler weather and more enduring motivation, sub 5:00 is possible. I’ll be back!