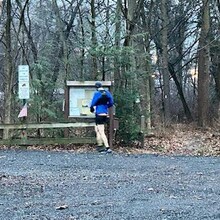 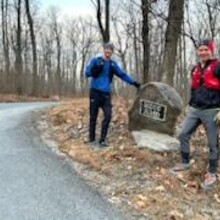 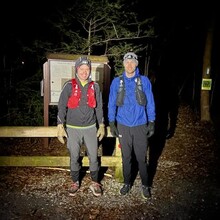 We started out with a good group of pacers leaving the parking at 0600 sharp. The weather was cool and raw which made extra layers welcoming in the post dawn hours. Jason and Barry dropped off within the first 10 miles and then Brett and I ran solo until Mile 37.

We met our wives at Mile 16 for a quick water resupply, a few strawberry uncrustables, and a slap on the ass to get moving again. We met up again with our crew at Mile 20 but didn't need anything. We didn't see them again until Mile 26ish at the turnaround. We took a few minutes to change out of wet clothes. The climb out of the turn around was approximately 3 miles and a little over 1000 ft. We decided a power hike was best to save energy for the later miles. We had aid once more at mile 33, but kept it very brief to top off water.

At Mile 37 Neal swapped out with Brett and started for the remaining 16 miles. Around that same time the sleet and rain moved in and began to turn the dirt road into mud. On the ridge we continued to run the flats and downhills, and power hike any smaller steeper climbs. As weather worsened and miles clicked off we did not stop for any more aid after mile 42.

The last 4 miles strained the quads as we descended into Mt Holly and the end of an awesome day with awesome people.