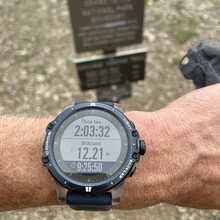 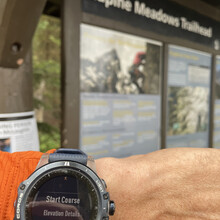 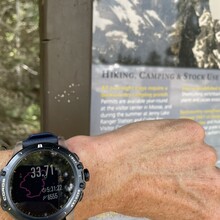 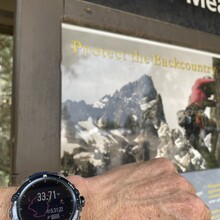 Almost 13 years after Evan Honeyfield and I set the FKT on this route together, and 12 years after he lowered our time, I set out to see if I could try to lower his. Certainly I had doubts prior to the attempt, and the only way to find out was to try.

The day I had selected had a poor forecast for running, heavy rain and thunderstorms, so I slept in thinking to push it back a day. When I woke up the weather seemed to be a bit better than forecasted and I decided to give it a go. Cool temps and the rainy forecast resulted in cool temps and few people on the early miles that can be quite crowded. After passing inspiration point I only encountered a few backpackers. I saw a black bear and cub lounging in a berry patch, they unconcerned about my passing. I did however have a bit of a stand off with a moose a few miles later that delayed me a minute or two until she decided to allow me to pass. I crested Hurricane Pass with about a minute lead on Evan’s splits and knee I had my work cut out for me.

I honestly started to feel a bit rough crossing Alaska Basin, but was able to turn it around some as I crossed over to Static divide. I really pushed the descent down to the bottom of Death Cabin, hitting the Patrol Cabin a few minutes ahead of Evan’s time. The mileage was taking it’s toll as I finished the descent towards Phelps’ lake. Came across another black bear with Cubs on the climb above the lake and also encountered a lot of humans.

The Valley Trail was predictably quiet, but I was very much on high alert as I had a very serious and scary bear encounter on that section a few years ago. The doubts of failure really hammered me on this section as well. I tried hard to keep pushing as the inklings of cramps began to lurk in. I felt like I was too far behind the splits to get the time when I got to Taggart Lake, but opted to keep pushing as best I could. My spirits lifted when I got to Bradley Lake and realized I had 3.1 miles to go with 34 minutes. It wouldn’t be a gimme as there was still a decent climb. I leaned in and pushed as hard as I possible up to the Lupine Meadows trail junction, made the turn and then buried myself as I ran down the final 1.7 miles. The mantra, “leave it all”, was repeated over and over again as I wove through day hikers and pushed the final stretch. I was delighted to make the final corner as my watch reminded me to eat at 5:30, knowing I had time to make the trailhead just ahead of Evan’s time.

I fumbled with my watch at the trailhead wasting 5-10 seconds getting it unlocked and stopped. Then promptly dry heaved to the disgust of a family starting a day hike.

When I discussed the attempt with Evan a few days prior he was very encouraging, and I hope that he is happy with the effort it took me to lower his time. This route has been such a special one to me and I am thrilled to once again, at least for know, hold the fastest known time.