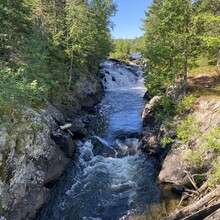 Started at the east trailhead and ended at the west trailhead in 12 hours, 27 minutes total mileage was 39.55 according to my coros watch. Beautiful weather, a lot of overgrowth, and an army of bugs. The trail crews did a great job of clearing the trail, I only had to climb over/under a few downed trees. I was concerned about directions going into it, but the trail was well marked in all the spots it needed to be. As reported by previous runners the eastern 10-12 miles were the most rugged, miles 20-28 were the easiest to get into a groove running. I stopped to filter water three times, it was warm and I ran dry twice since I didn't want to get off the trail. Camped at Trails End the night before with friends who drove around and picked me up on the other side.  I carried some emergency supplies, water filter, and extra food. I used a Garmin Inreach for tracking and Gaia for directions, but did not need to reference either often. Overall a fantastic day on the Kek.