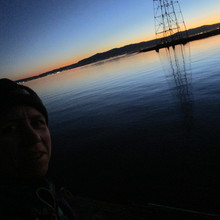 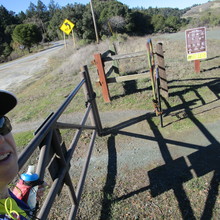 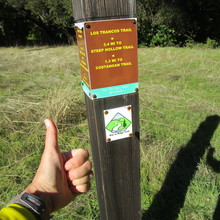 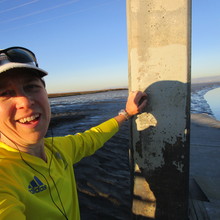 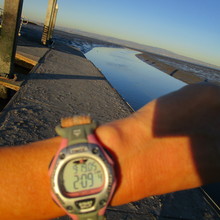 Today I followed the Bay to Ridge Trail, from the Baylands Sailing Station to Skyline Blvd and back. I made 2 small errors - I initially passed up the turn onto Park Blvd in downtown Palo Alto, and I got ahead of myself on the map while on Los Trancos Trail so I cut over to Pony Tracks Fire Road too soon (turned around and fixed both mistakes). Otherwise the Garmin link should be an accurate representation of the route. On the way out I visited the Arastradero parking lot/bathrooms plus the water fountain on the top of Page Mill Road; I skipped both detours on the return trip. I refilled water at the Foothills Park Interpretive Center. I parked the car outside the Baylands Nature Preserve because I arrived before the gate opened; I stopped by the car on the way back by to drop off a warm jacket/hat and pick up my water bottle (so this run is obviously self-supported).

It was a chilly but lovely day, great for running on the paths, roads, and trails. I enjoyed the varied route and the idea of running from the bay to the ridge and back. Hopefully other people will be inspired by this route, and maybe eventually it will connect with a trail through Stanford to Arastradero like originally envisioned.