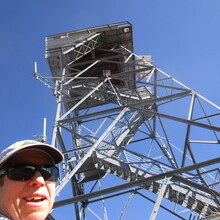 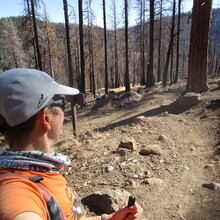 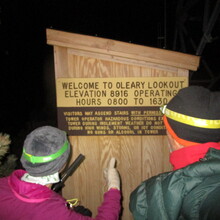 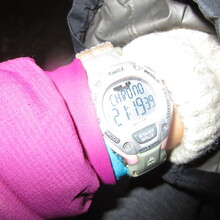 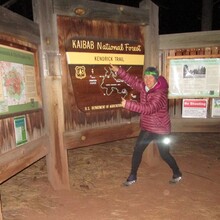 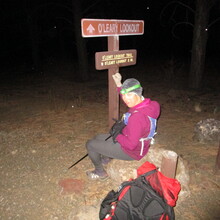 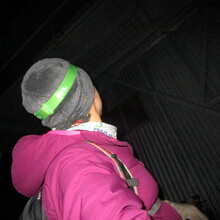 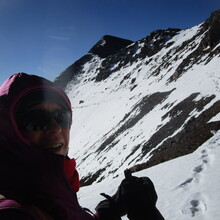 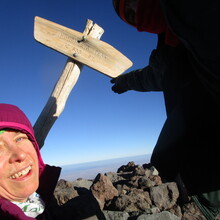 Well, that was something!  It's very much worth studying potential routes, scouting some sections beforehand and trying to optimize where to go.  Saving a little here and there was the only reason I was able to beat Helen's time, especially after losing time on top of Humphrey's (crazy wind) and along Weatherford Trail (slogging through snow).  I actually gave up on the attempt halfway through and figured I'd just scout some more, but ended up at Schultz Tank only slightly behind schedule.  So let's push on and see what happens.  The whole day was very much up and down, both on mountains and psychologically.  I really wasn't sure I could pull it off, all the way to the dark climb and run down on O'Leary.  The last half mile, most of it slightly uphill, was "can I make it?" and I was so relieved to see the gate finally appear.  Only 4 minutes to spare.  Wow.  Great FKT, fun to prepare for, wonderful views and a great way to explore these fine mountains.

When I got to Elden Mountain (peak #3) I was dismayed to see that my InReach Mini had locked up.  It was stuck at 11 hours-something, so it hadn't been running since the descent on Weatherford.  Dang it.  Not cool, Garmin.  I punched all the buttons, held down the power button, nothing.  I got out my phone and activated the RunKeeper app (which would be a good backup to have running, except my phone battery might not support 21 hours of that, and my phone is my backup for lots of things - communication, camera, ... flashlight).

So I have a gpx track from the start to partway down Humphrey's, and another from Elden to the finish.  The Mini actually reactivated itself in the middle of my run up the Deer Hill trail, but I didn't notice it and left it in the car at the O'Leary trailhead.

For the section without gpx tracking, I'm adding even more details than normal to my trip report, I've got a couple photos on Sunset trail, and John was at Schultz Tank and can vouch that I came down Weatherford and left on Sunset, all on foot.

And maybe someday someone will make a GPS watch that's small enough for me to wear on my wrist...

[note to admin - please let me know if you're looking for more proof of completion, as I've got a couple random things I could add and I can ask John to chime in too - thank you!]