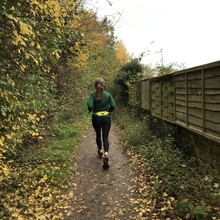 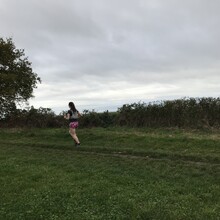 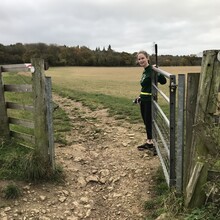 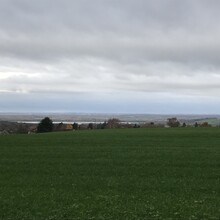 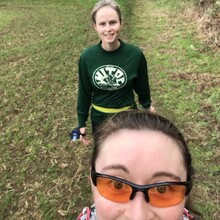 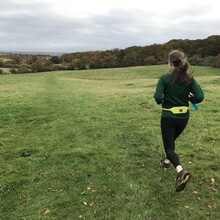 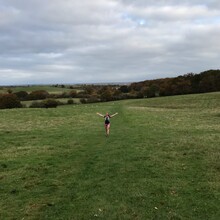 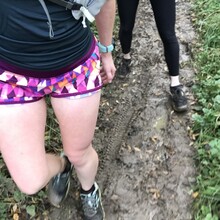 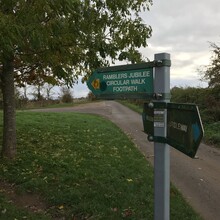 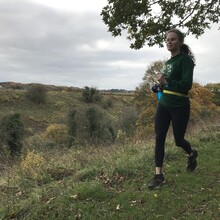 MK and I are both Americans living in Oxford. We met through climbing and more recently we’ve begun running together.

I started doing more ‘adventurous’ runs in the last year-plus and eventually found out that the Ramblers Jubilee route connected a lot of my runs into one picturesque loop! I submitted it to the FKT website this month because I think it will attract runners in Oxfordshire.

Last Saturday, MK and I did a reconnaissance run of about 90% of the route (checking mud levels and navigation) and this Saturday we attempted the whole thing! We ran counter-clockwise both times. There might be some ‘strategy’ with saving the muddier paths and waterlogged field for the second half, but not sure given we haven’t tried clockwise yet.

Since the beginning is at a crosswalk, we let the Folly Bridge traffic lights be our ‘starting gun.’ We carried all food and water ourselves, which was manageable given the route is <10 miles.

There was no flooding on the Thames Path yet, but in a few months the first mile of the route may be partially underwater.

Raleigh Park had the usual levels of mud for November and we walked the uphill while eating snacks. The uphill between Louie Memorial Playing Field and Westminster Sports Center had quite a lot of mud and we also walked here.

The area around the Youlbury Scout Activity Centre and the Carmelite Priory had some great foliage! The ‘foliage train’ continued through The Ridgeway and in Wootton Heath.

The views from the Old Berkeley Golf Course were great, as usual! Today we only saw sheep, but I do want to tell future runners that I have seen cows here and I walk past carefully. I’m okay with running by ovines but still cautious around bovines.

After the gate at the bottom of the golf course, there is a field that has been waterlogged the last few weeks (and do note that the two gates after this field are not working correctly but you can still go through, they just don’t fully open and close). The stretch of path from Chilswell Fields to the Chilswell Lane intersection is a complete mudfest and we walked here too.

Happy Valley (aka Chilswell Valley) is a good scenic viewpoint with some benches (though we didn’t stop today). We even saw a deer at the crest of a nearby hill! The fastest part of the run was the downhill away from Chilswell and towards South Hinksey - felt exhilarating compared to the previous power-hiking through mud :)

Upon getting to Devil’s Backbone and Hinksey Lake, you know the finish is close. The last half mile back on the Thames Path was a bit crowded today - with lots of runners, walkers, and cyclists… and many rowers, kayakers, and canoers in the water!

I was motivated to take on this challenge in part for setting the first FKT for this route and hoping that others attempt it soon! Another big motivation was navigating the whole route from memory, something that I accidentally (and then purposefully) practiced during my Oxfordshire running career. Feeling a tiny bit of nostalgia thinking back to rowing in the Thames as an Oxford undergraduate visiting student, then the time I found Raleigh Park in the first year of my PhD, and then later on Chilswell Valley and Wooton after I defended my PhD… and this route connects them all together :) Thanks MK for joining me on this journey (the PhD one and the FKT today)!

Weather was cool and cloudy throughout the morning. Cumnor area is a bit more ‘magical’ on a sunny day - you can clearly see Farmoor Reservoir if you look west.

Can recommend to other runners for a fun challenge that can be done in a morning! Note that conditions will vary by the season, but that’s part of the fun.