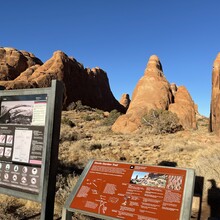 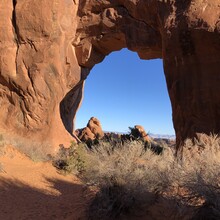 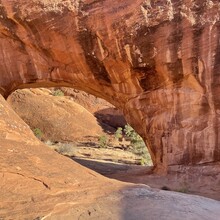 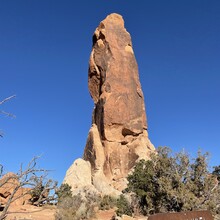 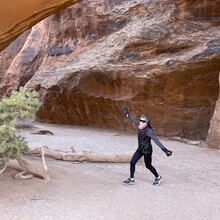 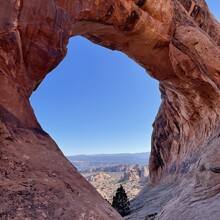 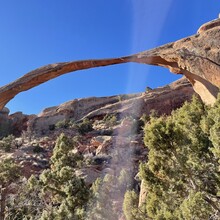 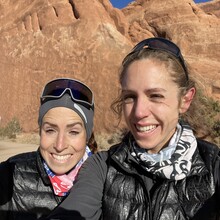 SCC & MCC tag-team FKT! We headed into Devil's Garden on Day 2 of our trip to Moab, with the goal of sight-seeing, snagging an FKT, and getting in a great trail run. We had originally planned to scope out the trail on Saturday but ended up doing a separate hike so this was our first time seeing the route! Since it was pretty chilly and not that long, we didn't bring along any food or water for the trip. Temps were around 25 with a bit of a wind that really hit again by Dark Angel.

We spent a bit of time studying the route and descriptions of those that have run it prior the night before - MCC had the route on Garmin; while SCC wrote out the arches in order on a slip of paper which she held throughout the run so we would know the next arch to look out for.

Well, this was an absolute blast. It was a super challenging mix of terrain, including soft sand, path, slickrock, and rock fins. The primitive trail was a bit hard to follow at points and we got a little turned around near Dark Angel where we we were trying to rejoin the main Devil's Garden trail. Ultimately we spotted the cairns and a few hikers coming up the opposite way and were were able to get our bearings. Once we cleared the final arch we pushed as hard as we could down the final 1 mile as it was decent footing.

Much respect to the gents who got this done close to an hour - this route taxes your navigation skills, requires turnover on the quick parts, and a healthy sense of adventure as you hop from one slickrock to the next.