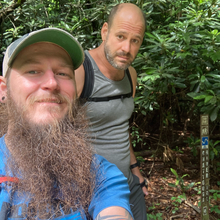 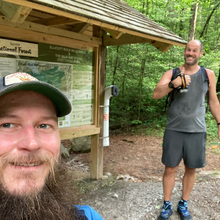 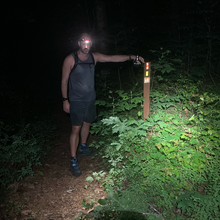 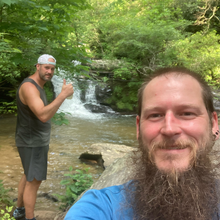 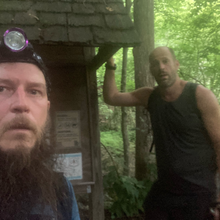 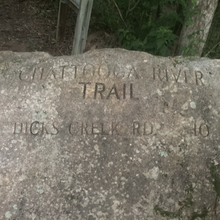 Motivated by my amazing wife, Beth Budden, I recently noticed that the Chattooga River Trail has no listed unsupported FKT (fastest known time). I’ve backpacked the trail many times and have “run” it once before with John Wagaman. We completed it in 24 hours 5 minutes a few years ago, so I got the idea that we could document a “run” of it to submit for an FKT.

The Chattooga River Trail is a little less than 50 miles. It starts at Whiteside Cove Rd. just outside of Cashiers and travels to HWY 76. Along the way, it travels through NC, SC, and Georgia, passing the common intersection point of all three states (Ellicott Rock). It overlaps with part of the Foothills Trail (Burrell’s Ford to Lick Log Creek) and the Bartram Trail (Russell Bridge to Sandy Ford).

We started at 10:54am on Sunday, 6/13/21, covering the section of trail along the Upper cascades. We knocked this section out fast, but could feel the heat of the day building. There was a chance of rain, but it never was more than a mist. Despite the lack of rain, we became soaked with sweat and stayed wet throughout the remainder of our trip. About 6 miles in, you come to an Iron Bridge on Bull Pen Rd. There is a 3 mile walk along this dirt road before tucking back into the woods in the Ellicott Rock Wilderness. Another 3.3 miles later (Bad Creek Trail) and you come to the Chattooga River near Ellicott Rock. This begins a fairly technical stretch along the river that lasts to Burrell’s Ford and on to Lick Log Creek. This technical stretch is one of the most popular areas for backpackers and fishermen, and there were quite a few around Burrell’s Ford. It also overlaps (in part) with the Foothills Trail.

After Lick Log Creek, the Chattooga River Trail covers a 3.9 mile stretch to Russell Bridge and this area receives little attention. I had run it a couple of weeks ago and knew that it was very overgrown. Towards the end, there were an abundance of stinging nettles that were impossible to avoid. At one point, John was in front of me and he stopped to swat at his leg and said he had been stung. I looked up to see a swarm of yellow jackets starting. I yelled to him to run and we managed to avoid additional stings. We also came up on a copperhead sunning himself in the middle of the trail on this stretch. Using my trekking pole, I was able to gently encourage him to move the bushes in the side of the trail.

We crossed the Chattooga River on Russell Bridge on HWY 28 and began the atart of the Bartram Trail. This was the first trail John and I ever backpacked together, so we know it well. It was getting dark at this point and the exhaustion of dealing with the heat all day was starting to set in. After about 6.3 miles, we came to Warwoman Creek and a campsite that we have used many times in the past. We crossed the bridge over the creek and about a half mile later, we could hear music playing. At this point it was almost midnight and we knew there were people partying at Earl’s Ford. As we walking into their camping area, we saw several headlamps and were greeted by the campers. One guy in particular asked where we were from, what we were doing, and if we wanted anything to drink. Of course, we were unsupported, so we declined. He warned us about timber rattlesnakes and panthers and we moved on. Shortly after this encounter, we walked up on an armadillo in the trail. A few years ago, no armadillos loved in this areas, but this was one of two that we saw on this trip and there were many signs of trail dug up by them throughout the second half of our trip.

The next point of interest we came to was the point where the Bartram split off from the Chattooga River Trail, shortly after the side trail to Dick’s Creek Falls. This is a major intersection with a campsite and numerous trails. We immediately became confused as would couldn’t find where the Bartram went after some Vlue ribbon that had been hung along Dick’s Creek. It took us about 20 minutes to figure out that there had been a bridge across the creek that was washed out. The banks of the creek were sheer and deep, but we eventually found a spot further down the creek where someone had taken part of the washed out bridge and balanced it on some logs, allowing for a dry crossing. Shortly thereafter, we made our final separation from the Bartram trail on the last 10.6 mile section.

John and I knew from previous trips that this last section is tough. It isn’t technical, but is long and, compared to the rest of the Chattooga River Trail, it is uninteresting. We saw a good bit of wildlife through here: several deer, another snake, and another armadillo. The trail here was in bad condition. It was overgrown and two additional bridges had been washed out. At the first one, the trail seemed to stop abruptly at what I thought was the Chattooga River (it was the middle of the night and we were exhausted). At this very spot, there was an enormous tree that had fallen. We assumed that the tree had blocked the trail, so we climbed through it unable to locate the trail in the other side. We just have spent another 20 minutes climbing up and down the bank trying to find the trail before we realized that it wasn’t the Chattooga River we were near, but a separate creek and the there had been a bridge where the tree came down. We had no choice but to Ford the creek, then we found the trail on the other side.

Once we were just a few miles from finishing, we realized that we were probably going to be finishing around the 20 hour mark. This motivated us to pick up the pace to try to beat 20 hours. This last section of trail winds in and out of one cove after another, and about 2 miles from the finish, there was another washed out bridge crooked in one of the coves, we found the safest place to climb down into the gully and back out by the bridge, and started running. This was probably the fastest we moved the entire trip and we finished the entire trail in 19 hours 52 minutes 59 seconds.

Overall, it was fun getting to do the entire trail unsupported with John. I highly encourage others to check it out and to try to beat our time. The most difficult sections were between Lick Log Creek and Russell Bridge, then the last 10.6 mile stretch from Sandy Ford to HWY 76. This is mainly because they are overgrown and in need of some trail work. Be mindful of the washed out bridges as they can cause a lot of confusion in the middle of the night.