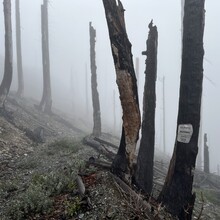 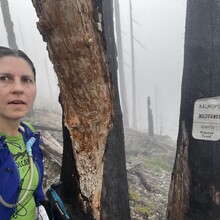 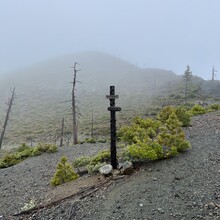 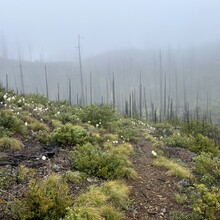 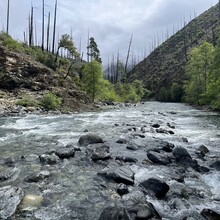 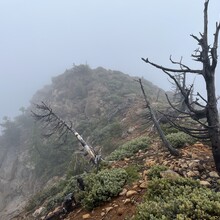 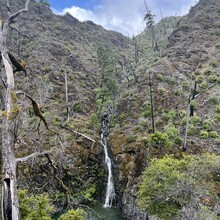 First off, huge thanks to Ryan Ghelfi for establishing this route, Matt Kline for the advice on local conditions, and Siskiyou Mountain Club for their trail maintenance.

I had initially planned to run this June 4 or 5, but a massive and unseasonable rainstorm moved through that weekend, so I postponed to the following week. It looked like Saturday was going to rain, so I decided to drive in Thursday after work and run on Friday so that I could . That did mean I wasn't able to start quite as early as I would have liked so I could get some good sleep after the drive.

I started off about 7:15 AM in foggy conditions. Matt Kline had warned me that the Chetco River might still be running high enough that it might not be safely passable. Therefore, I opted to run this route counter-clockwise (as Ryan Ghelfi recommended) so that if I had was unable to cross the Chetco, at least I would turn back 10 miles in rather than 40 miles in. It was a beautiful day to be out! Cool, but not so cold I had to worry about staying warm. Beargrass was starting too bloom. Saw my first poison oak about 9 miles in. By the time I got to the Chetco the fog had started to burn off and the day was gorgeous. I had to try a couple of spots to see where it the river was safe to cross for my 5'3" self, but I did manage to cross safely. The next mile or so the trail disappeared several times in the bushes (more poison oak) but then I got to a section of trail that seemed recently sawed out.

The next 10 miles were mostly short, rocky ups and downs with a fair number of creek crossings. I discovered in here that I had a pinprick hole in my the water bladder I was carrying. The leak seemed slow and the day was cool, so I opted to keep going. Even thought the water leak was slow, it was constant so I was absolutely soaked from the waist down for the entire rest of the day. If it had been much hotter at all this low elevation section would have been brutal, but today it was no more than a tad warm. Probably saw my last poison oak for the day about 20 or 21 miles in when I'd gotten back into one of the few forested sections of the loop.

Noticed the titular Kalmiopsis blooms shortly before getting to Vulcan Peak. I'd expected the short cross country stretch to Vulcan peak to be a scree crossing, but it tended more toward large boulders nestled among shrubs. There must be stunning views from up here, but the fog had settled back in so I didn't see them. After descending from Vulcan Peak I hooked into the Chetco Divide Trail. That turned out to be an old road that was rocky, but surprisingly flat and I tried to get a bit of running in here. In the fog, I nearly missed seeing Chetco Lake, my last reliable source of water. After filling up with water, I could immediately tell that what had been a slow leak in the morning was now a pretty steady one and I tried to guzzle water as fast as I could hoping it would keep me hydrated to the finish.

Once I got on the Kalmiopsis Rim Trail, the trail immediately harder to follow, with rolling hills. This became a problem once it got dark because you only had to be a few feet of trail to lose track of it. I got slightly off trail a couple of times and had to use the GPS track to find it again. I stayed focused on just continuing forward to the finish. By this time I was out of water. That did mean my butt had finally dried off but the big negative was that it was hard to get food down without water. Sometime around midnight a steady rain started up. When Bailey Cabin trail connected, I very briefly started down it, but quickly realized my mistake and got back on Kalmiopsis Rim to head back to Babyfoot Lake and the finish. The loop was pretty cool, but I was not in the mood for a 2nd lap! Super excited when I caught a glimpse of my husband's headlight hanging out at the finish. I'd hoped to finish in around 16 hours, but in the end was just enormously proud to have finished such a big remote loop as a solo effort.

I would be interested to see what someone can do by running this loop in the clockwise direction. That feels better to me for being able to take advantage of the runnable sections. Also there'd be more water in the 2nd half. That said, I do think the low elevation part of this loop is a crux section because of the particular combo of rocky, narrow, steep, poison oak-y, and often hot it is.

I did this route unsupported. I started off with everything I would need for the whole loop except water. I got water from creeks and lakes along the way. No one ran with me. The only people I saw all day were 3 hikers about 2 miles in. Since I'm the only woman who has run the strava segment at the beginning of this route, I'm reasonably confident I'm the only woman to do the full loop unsupported in less than a day. There is about a 1/2 mile overlap in the 2 GPS files I provided because I wanted to make sure I recorded the whole route. My time for the loop was recorded by a stopwatch.