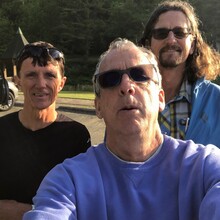 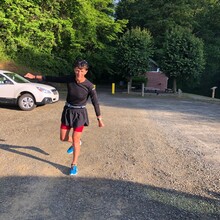 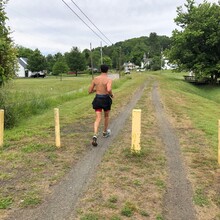 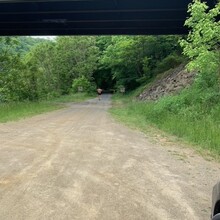 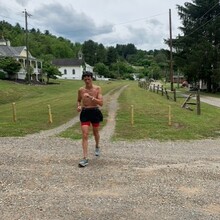 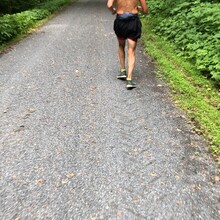 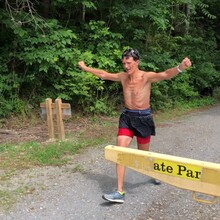 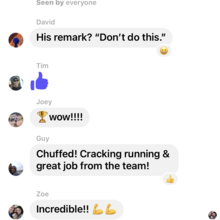 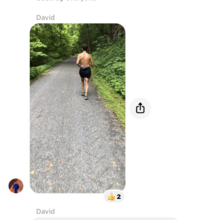 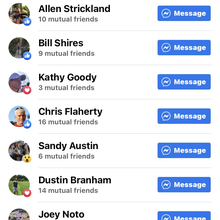 [Editor’s Note: Martin experienced GPX errors towards the end of his route. His GPX straight lines for a couple of miles and then cuts out all together 4 miles from the finish. According to his GPX file text, elapsed time of the effort is 6:59:57. Stopping 4 miles and 35 minutes short is consistent with his reported 7:35 finish and per mile pace. These errors only presented themselves after Martin uploaded. After a conversation with Martin, I assess his effort as valid.]

The big caveat: this is my first 50-mile attempt since completing the American River 50 in Sacramento, CA over a decade ago. I’ve done several marathons and overnight relays where my mileage was well over 26.2 since including a 2:29:46 20-miler at the Uwharrie Gravel Run on May 1, 2021. This was a grand experiment to see what my 59-year-old body could still do. It’s been in the works to try for over a year. I view attempts like this as much a psychological challenge as physical and I wasn’t mentally ready last year. My strategy was to reduce the non-moving time as much as possible as I know trying to run faster and take breaks, non-moving time would be a disaster. Through intense planning the route was broken into 12 legs where the support crew would meet me and provide supplies for the next segment. By having regular meeting points, the amount of carried supplies was kept to an absolute minimum meaning I only needed to wear a waist belt and occasionally a hand carry bottle.

I had a support team of well experienced ultra-marathoner Chad Randolph and big-time buddy, Dave Altshuler. Chad would insure I was consuming enough and watching my general demeaner at the aid stations to insure I was not putting myself at health risk. Dave would track the progress, do most of the driving early on and eventually follow close behind me on a bike to keep a set eyes on me making sure of my heath safety. Dave is also an expert on mental state of people and would aid in keeping me sane.

The Legs are tracked in terms of minutes. In 50 miles plus and 7 ½ hours of running, the rounding error of seconds is inconsequential.

Started well off the gate nearer the street to make sure the location of the start covered the entire distance. Got a good picture of the team. Had a bit of a misstep at the beginning as one of the two tracking watches I was wearing failed to start. Had to backtrack and restart but the time is included in the overall as I didn’t want to restart the first and primary watch. Nice 50-degree morning with a bit of mist. Took early miles very easy to insure to set up a pace in alignment of my 130-135 BPM target for the duration. Arrived a bit early but wasn’t too concerned as the target time pace was set up with the overall time with the assumption I’d slow in the latter miles.

Continued to monitor heart rate and consume as much according to the original plan. I have come to a realization that the combination of an early morning coffee and the ARGI+ wasn’t a particularly good idea and I’m having to stop to pee about every two miles. I decide to increase the fluid intake to try flush it from the system. The temps are staying lower and the route is heavily shaded at this portion. With the beginning of the downgrade adding to the time bank was easy.

Just starting to get into a real rhythm. I’ve finally started being able to run more than a couple miles without having to stop and water the local vegetation.

Oops, where’s the crew. My instructions were to continue onto Buck if the thought they had missed me. The circumnavigation through Fries meant this was the most risk portion of me arriving before they did. I ran through the checkpoint about 200 yards. Fortunately, I looked back and saw them pull across the road and into the lot next to the trail. I backtracked to meet them. Better to sacrifice a little time rather than have the whole effort buggered up because we had lost each other. This was the point in time I regretted not carrying a phone to keep carry weight to a minimum. Fortunately, after this leg, the timing shouldn’t be a problem.

This to me is one of the more appealing portions of the trail with the bridge crossing shortly after Ivanhoe. If also seems to offer the most runner friendly section with a nice downgrade. This section seemed to fly by.

Finally, the familiar drone of I-77. I’ve passed over and under that bridge many times. I find the fact I’ve made it this far comforting; an emotion mid-point of the course, even if not exactly a physical one.

My stomach has descended into hell. My gut has decided that this was all a stupid idea and is doing its best to convince my head of the same. Fortunately, my head gets filled with the blog of friend, Michele Beck, who just finished the Keys 100 and battled though adverse conditions considerably worse than mine. If she can battle on to a finish under those conditions, so can I. Time to go to my last resort, kumbacha; an interesting concoction of fermented green tea and ginger. If that doesn’t work, I’m stuck with my last-last resort of crystalized ginger. I really didn’t want to go there. Matter improve instantly and I restart absorbing water and food becomes appetizing again. Now that I’m running on only what I shove into the bloodstream, this is critical. The pace picks up and, more importantly, I feel better. This is also the place where Dave begins following me on a bike. This is for my safety and well-being as he will constantly monitor me and be able to call for help immediately should things go awry. I’m 59-years-old. Even though I’ve completed a good number of events similar or longer though my athletic history, we believe it’s a necessary precaution. It’s a 50-mile run. I’ve now essentially run a marathon and too much can go wrong. Being left out in the woods with no immediate support can be deadly.

Funny how when attempting events like this, matters like gut health become as important as whether the legs feel good or not. My stomach is beginning to recover from the malaise thanks to the kumbacha. I spend the majority of this leg lusting after the idea of another round. Strange the things that become important to you when you’re reduced to a the simplest of physical nature with a single goal in mind.

A slightly boring leg. The trail is separated from the river by the highway, so there just isn’t much to see. I was thrilled to have Dave following behind quoting various pieces of literature from the top of his head and telling me he had no idea how fast I was traveling but I sure looked good doing it. At this point, although grateful for the constant oversight for my well-being, the quotations were now the noise equivalent of the teacher in Charlie Brown cartoons. I later learn there was a growing concern among the crew that I had almost stopped eating any solid food. I was depending on the kumbacha, gels and calories from the liquid.

Leg 11 – Leg 11 - Hiwassee New River Trail State Park Parking to Draper Station on the New River Trail - Time of Day: 2:25 PM - Cumulative Time: 6:50:00 – Time for the long drag up to Draper. I’ve crested the point that I wonder why this was a good idea. A full bottle of kumbacha has settled my stomach and I’m now running on a bunch of sugar and the small amounts of “naturally occurring alcohols” (read the label on the kumbacha) and have taken in very little solid food since Allisonia. I find out later the crew was a little worried. I decide to make this the last support stop. I haven’t done the math to determine whether I was on track and my mind was no longer able to do much more than look at the descending P numbers on the mile markers. I must have still looked reasonably well as Chad allowed me to continue and accepted the instruction from me to go straight to Pulaski.

A little uphill left and then the 200-foot drop into Pulaski. The uphill isn’t that bad, it just goes on and on and on. The beauty of following the New River is gone and the course gets a little boring. I’m also very tired at this point, mentally more than physically. The plan appears to have worked to a tee and as-long-as I don’t crash and burn miserably, I will beat the FKT by a good margin. I picked up the pace a little as the descent started to try and stretch the legs and convince myself I was going to be OK for the remainder.

Closure. Finishing such an adventure with only your two crew members, a couple of strangers never meet a stranger Dave now has their life history behind a non-descript mini-ware house is a bit weird. I ran to the gate plus a bit to insure I had completed the course, circled back and that was that. No fanfare. Just the gratification of my crew informing me I had beat the previous time by 18 minutes.

The best part: no matter what happens to us individually going forward, Chad, Dave and I always have a connection in accomplishing something most would say isn’t possible. For me, it’s time to pay what they did for me forward.

For anyone who has read this entire message, I'm open to being crew for your effort. I learned a lot in this attempt I'd be happy to pass along. Records are meant to be broken and I'd be happy to help an effort to go faster than 7:35:00.