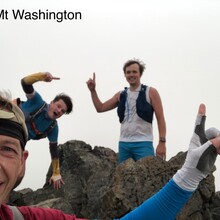 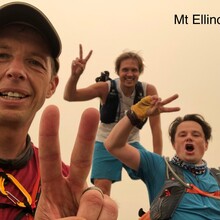 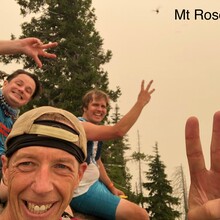 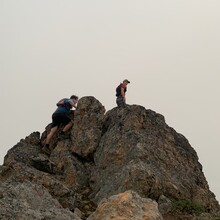 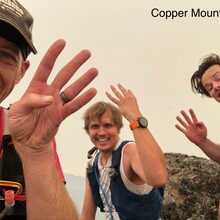 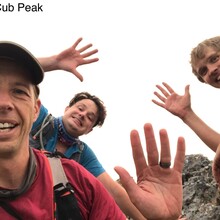 Finally, after years working on the route Chris, Scott and I put it all together in one run. Damn the smoke, the road closures, the pandemic, damn everything we're going.

Traversed to Mt. Ellinor - wow, what an incredible stretch of mountain. Beautiful, but not for the faint of heart.

Down to the Connector trail that after I found it just a couple of month ago made it all possible.

We stashed water just off the trail to refuel.

Over to Bear Camp.

Down to Rose Trail.

Completed the Mt. Rose summit loop and headed back to Bear Camp.

Followed the boot path to Bear Gulch, from there we bushwhacked into the general direction of Copper Mountain.

Climbed the East Peak, realized it was the lower of then the West Peak and traversed over there to climb that one two.

That's why we don't have a summit pic of the east peak. But the traverse was challenging enough, and the summit prominent enough that we added a peak number and called it 6 instead of 5 peaks.

From there we headed down to Wagonwheel Lake the normal bushwhack-y climber's route.

Up to Cub Peak, because when you're already there you gotta take that one too.

Climbed Cub Peak and made our way all the way to the real summit along the short ridge even though the legs were shot.

From there we took the regular trail down, past Wagonwheel Lake and to Staircase.

Took a longer breather along the trail just a mile before Staircase, because I couldn't go on without it.

Bonus: With Staircase being closed we had to add on the 7 miles from Staircase to Big Creek along the road. This is dumb and we left it out of the official FKT route. There was water at Staircase campground,  which was very nice.

What a day, what a route.