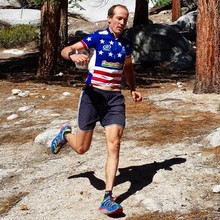 Matt Dubberley set the overall fastest ascent (1h47m40s) and car-to-car (2h38m15s) times for Whitney on August 2, 2015, via the Mountaineer's Route. His detailed report his here, along with a link to his GPS track. The FKT run was his second attempt after a failed effort a few days earlier.