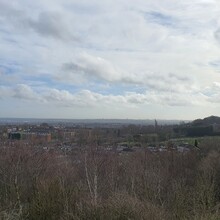 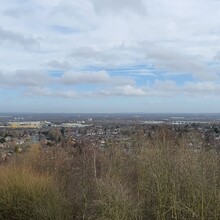 This was my longest run to date, so took it fairly easy, was hoping to get under 5 hours but one too many detours meant I dipped just over, but enjoyed the run despite it being more road/residential than I had expected.

First couple of km were pleasant and downhill, and suprisingly not muddy/wet, then I turned a corner and the path was completely flooded! So I climbed up the path bank and skirted along the edge of the adjacent field to avoid getting my feet wet immediately.

After coming out at some houses, I then dipped on to the canal towpath for a few km which was nice, before reaching Wednesfield, and the industrial area, which thankfully didn't last as long as I had thought it was going to. Around 7.5km in I reached a locked gate (as expected from reading one of the other reports), but was able to fairly easily navigate around after checking my phone I wasn't going to go too far off!

Few more kms on the road, before dipping back on to a canal towpath again, when I got to the bridge/Biddings Lane I found I couldn't get off the canal as it had been completed fenced off, so after running back and forth I managed to find a path off and ran back round to the bridge (around the 14km point for me vs 13km on the route).

From here some more road running, before going up some hills which is where I took my pics (I think). Realised I went slightly off here but got back on track quickly.

Some more road running again, before getting to St Bartholomew's Church which I walked through whilst having a snack (23km for me now vs 21km for the route).

No issues for the next 8km or so, but when the route gets to Smestow Academy I had to take another detour as it just gets to a fence, so had to rundown Windmill Lane before reaching another canal.

Next 10-12km was fine with no issues, once I got to about 35km in I began run/walking to average around 7min/km to try and get in around 5hours. One final detour at about 42.5km on the route (45.5km) for me as again got to a locked gate, so took an earlier right turn meaning I ran a bit further down Underhill Lane before turning back into Northycote Country Park and finishing the loop in 5hrs 2mins and 39secs.