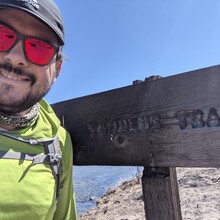 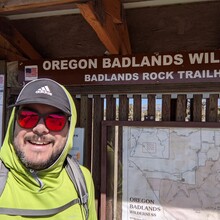 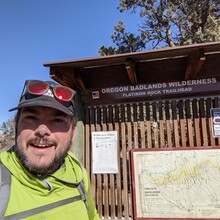 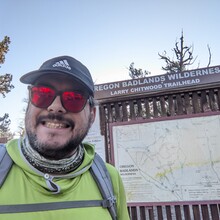 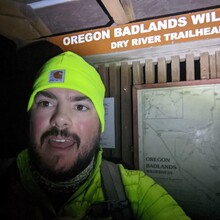 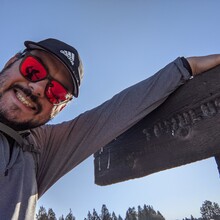 I drove the 3.5 hours from Portland to Bend on Friday morning, arriving at 11am. My goal was simply to hike Christof Teuscher's 65.3 mile optimal Badlands Challenge route through the Oregon Badlands Wilderness, and I had originally planned to do it over two or perhaps three days, so I brought a 20lb pack with camping gear. I pre-cached some water bottles at each of the trailheads in advance, but carried all other supplies and equipment.

I started hiking at 11:22am, and realized a couple of hours later that I was on a pace comparable to Christof and Megan's existing 19h40m FKT for the route. I decided around 4pm to accelerate my trip and complete the route in a single push, hoping that I might challenge the existing overall FKT. This would be my first time hiking more than 25 miles in a single push, but I was feeling optimistic.

Things went very well until about mile 52, when I realized that due to an earlier short diversion (there was an unmarked trail in the official route), I needed to make up about 10 minutes in order to be on pace for a 19h40m completion. I upped my pace and trail-ran a couple of miles, and then immediately bonked from the exertion and the sub-freezing temp at around mile 57. I hit the wall and the body gave out completely. I limped it in the last few miles, finishing the route at 8:42am.

This was my first ever attempt at an FKT, and I did it on the spur of the moment. It's also my longest single push in terms of distance (66.9mi), coming in at more than 2.5x my previous longest distance of 25.5mi. I'm pretty happy!