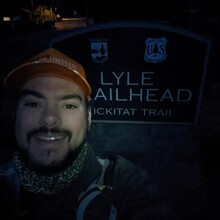 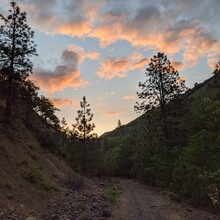 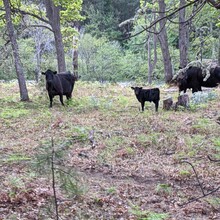 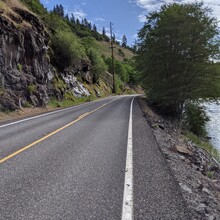 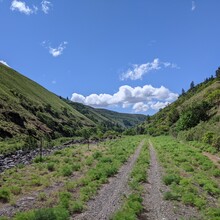 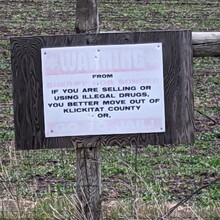 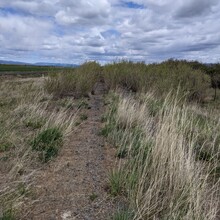 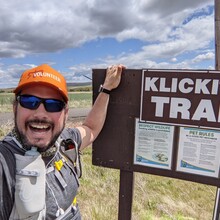 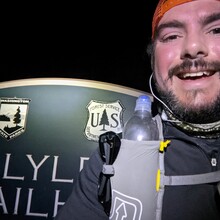 Woke up early to do a super-long day hike, and hit the trail from the Lyle trailhead at 5:00am. The first ten miles along the Klickitat river were scenic, although cars were always audible and sometimes visible from the road across the river. Parts of this section are open range, and I interrupted a noisy herd of cows who were grazing right alongside the path. Miles 11-13 are urban interface with Klickitat, and I got yelled at by a very intoxicated dude as I walked past his house at 7am. After walking through the community of Klickitat itself, the trail abruptly ended at mile 13 with some signage noting that the trail is incomplete, and that entry into the trail area is forbidden. The next 3 miles involved walking on the (sometimes non-existent) shoulder of the highway until the bridge at Horseshoe Bend Road allowed me to cross the river and resume the trail.

Swale Canyon was beautiful but endless, and it wasn’t until around noon and mile 25 that I saw fellow hikers and cyclists on the trail. A lot of day hikers appear to start/finish at the Harms Road trailhead at mile 28. The last 3 miles of the trail are through farmland, and the very last official quarter-mile trail segment from Warwick to Uecker Road is obviously rarely used and was quite overgrown. I don’t know why anyone would want to start at Uecker Road, and probably the trail planners should have just ended the trail at Warwick. I walked past a local farmer filling his pesticide sprayer during this section, and we struck up a quick conversation. He very politely told me that people like me weren’t welcome out here and he wished I would just stay in Portland, which was my cue to end the chat.

The return journey was all downhill and uneventful except for some unexpected rain through the Northern section of Swale Canyon. I stopped at the tiny supermarket in Klickitat (just south of the school — “Home of the Vandals!”) on the way back for a soda and a hot snack, otherwise this would have been an unsupported effort. The trail officially closes at dusk, so I was slightly nervous about night hiking the last couple hours of the trip. Nearing the end of the trail, I was feeling good despite some blisters, so I ran the last 3 miles to finish my 61 mile journey at 10:40pm. An hour and a half drive back to Portland turned this into a 22-hour day, but it was a fulfilling one.