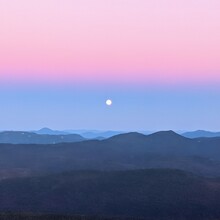 First off, the run was awesome, and such a great experience. This was my first run over 50 miles and nothing I have previously done touched this amount of elevation change.

Given the route is a "figure 8", there are some options for which half to do first and whether to go clockwise or counterclockwise. I opted to do the southern half first in the counterclockwise direction, followed by the northern half also counterclockwise. My rationale was due to knee and hamstring injuries that are especially bothersome on the hills. Unfortunately, this was the only weekend I could do the run, so didn't have the flexibility to wait for injuries to get better. I figured getting all the climbing done first (trial by fire) and leaving the flatter part for last would allow me to see how the knee and hamstring were going to hold up, and then I could push it at the end with less vert. The challenge with that plan was that it meant doing the Presidential traverse in the later part of the run, and at night. But I figured I'd be slower on the ups/downs by that time anyway, and therefore the dark would have less of an overall impact.

What I didn’t plan on, that ended up being the best part of the whole run, was an incredible near-full moon with a clear sky to aid along the Presi, followed by an amazing moonset, followed by a great sunrise. I could not have had better weather for a fall jaunt in the mountains.

As for trail conditions, the recent rains made for some muddy and wet/slippery conditions when not in the exposed areas above tree line but nothing major. I mention this because it did affect my normal pace going downhill and was not something I considered when planning food out.

As for the actual run, everything went really well, and I had a blast. I followed the respective rules of the Pemi Loop and the Presi Traverse (including Clay). During the run I couldn’t remember if tagging the summit of Garfield was required, so I did the little offshoot to tag it just in case, and while on South Twin, it looked like there was a slightly taller part of the mountain just to the northeast, so I tagged that as well to be on the safe side.

For grub, as mentioned in the route description, I left a cache of food at the parking area near the train tracks. I also cached food and water at the intersection of the Presidential Rail Trail and Jefferson Notch Road. Perhaps I should have also cached food at the Lincoln Woods Trailhead. I didn’t buy any food at the huts but perhaps that would have been a good strategy to lighten the pack a little, I just didn’t want to rely on unknown foods during a long push. At the end of the day, I had plenty of nausea with the foods I am used to, so don’t know if getting food at the huts would have made things better or worse, so I just stuck with what I had.

One note on the originally posted route, there is a small section of trail about 1.25 miles up the Avalon Trail that has been blocked off and is no longer a trail. It is clear when you are on the trail but just wanted to point out this minor deviation from the map I made in Gaia. Despite it being clearly marked, I missed the re-direction sign in the dark, saw on my phone that I was “off-route” and backtracked down a little bit, only to see the sign and head back up.

In sum, love these two routes, individually and combined.