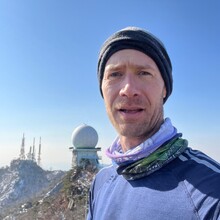 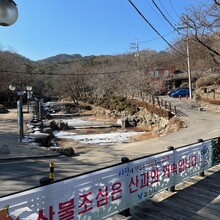 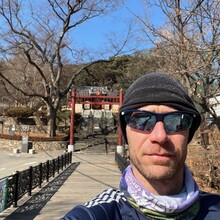 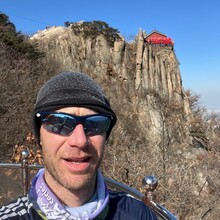 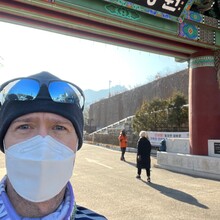 Despite the cold weather and a recent snowfall, I decided to give this route a shot on a Thursday morning in mid-February. I wagered that there wouldn't be many people on the trails. And I was gambling on sticky, well-packed snow on the upper parts of the mountain. As it turned out, the rocks were very slick in some parts, and I had to stop running and tread carefully. I tried to err on the side of caution since I was running and hiking without microspikes (called 아이젠 here in Korea) or trekking poles. Thankfully, I had only a few small slips and one minor fall. The waterfall and stream on the approach from the top of Seoul National University campus were completely frozen up -- a mass of cloudy white crystals. As the day wore on, the sunshine melted thinly iced patches on stairs and rocks, which helped me out a bit.

My biggest issue was my Osprey hydration bladder. I'd filled it with about 1L of water, but the tube froze up within 20 minutes (before I'd even tried taking my first sip). I ended up doing half of the route without water and buying two bottles at Yeonjuam Hermitage, near the top, right after my second time to reach the top. I ate two energy gels and had one Gu Liquid Energy along the way.

I was still feeling fresh two-thirds of the way through, so I made an effort to jog up as much of the final ascent as I could, enjoying the birdsong in the forest. One older man heading down had seen me elsewhere on the mountain and asked how many times I was going up the mountain.

I'm not sure how many people have done this route before, but I'd like to think I'm establishing a new route here, for completists. I encourage anyone who tries it to pick a quiet day without ice on the rocks.