Information on Mt. Gwanaksan can be found at

These three trails are fairly steep and direct, with lots of stone steps and staircases made of wood or metal. Route (1) runs along Dorimcheon Stream, then up past a waterfall. Route (2) is a long ridge, with many ups and downs, and even a small pinch of rock climbing. Route (3) is another forested valley carved out by a stream. There are hikers on these trails all year round, and this can be a factor when it comes to keeping a fast pace.

About 500m south of the highest peak is a cluster of Buddhist hermitages, including Yeonjuam, where bottled water, cold canned drinks, and ice cream can be bought. And at the peak is the spectacular hermitage Yeonjudae, perched on a sheer cliff. There are also off-limits radio and radar facilities near the top.

Gwanaksan is the second-most-popular hiking area in the greater Seoul area (home to 26 million people). It's where the southern city limits of Seoul meet the northern limits of Gwacheon and Anyang. The area -- which can be roughly divided into Mt. Gwanaksan, on the east, and Mt. Samseongsan (481m), on the west -- contains dozens of historical sites. Many of the temples and hermitages on and around these peaks were founded by the famous monk Uisang in the seventh century. 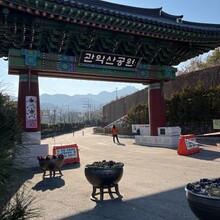 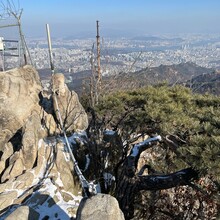 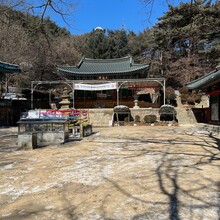 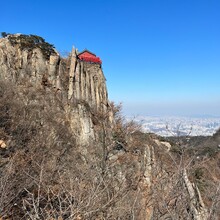