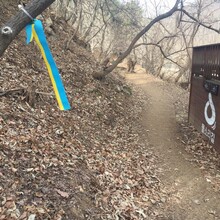 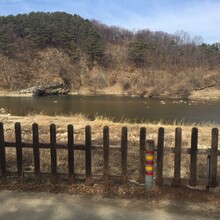 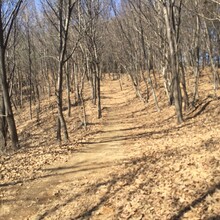 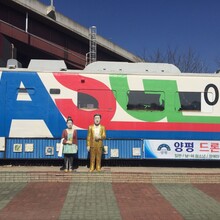 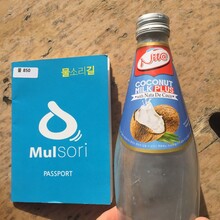 I began the run at Yongmun Gwangwangji (용문관광지; Yongmun Tourist Area), at the end of Course 6. This is a tourist zone with hikers' restaurants a big parking lot. After filling up some water bottles at the tourism office and walking up the road to make sure I was at the very start (or, actually, very end) of the Mulsori-gil, I pushed "start" on my Garmin Forerunner 935 and set off down the road. It was early spring, so the weather was nice for running, though the trees and fields were still bare. The dirt and paved roads and the occasional trail through the forest were a tad hilly at times, but not so steep that I ever had to stop and hike.

Soon after receiving the second stamp for my Mulsori-gil passport, I made a wrong assumption and crossed the Heukcheon Stream (흑천) on some stepping stones, heading east. I had to double back as the route actually veered west at that point, toward Yongmun Station (용문역). There was a bit of construction near Yongmun Station, but that didn't interfere with the trail. Especially along the eastern sections of the Mulsori-gil (courses 5 and 6), I was basically on my own -- there were very few hikers on the trail on this day in late February.

The riverside stretch of Course 3, which was the most scenic, in my opinion, ended up being a bit confusing at points because of a lack of clear signage, and my pace suffered a bit here. However, it was enjoyable to run on the dirt trail and across small footbridges as well as on the elevated walking and cycling lanes lined by cherry trees.

On the hill just west of Asin Station (아신역; Course 2), where the retired-train-track section begins, there was a set of bathrooms and outdoor taps for the public, but unfortunately the water had been shut off, probably due to the Covid-19 pandemic. I actually missed the stamp for my Mulsori-gil passport here and had to double back 100 or 200m. The coolness of the Course 2 tunnels was quite welcome at this point in the run.

By kilometer 52, I was beginning to feel fatigued and walked down from the trail to buy some refreshments at a roadside convenience store.

The pine forest section at the eastern end of Course 1 offered the most enjoyable trail running of the entire Mulsori-gil, ending at the last stamp station of the run, right next to a memorial stele dedicated to a Joseon Dynasty government official. The last stretch was a jaunt down country roads and was representative of much of the 57km covered that day.