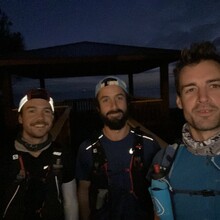 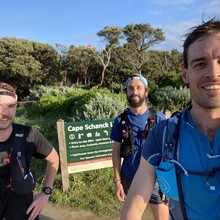 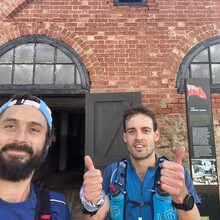 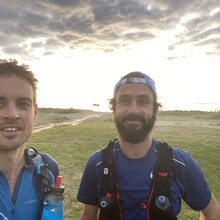 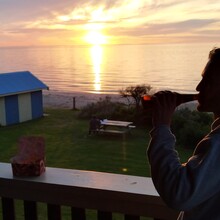 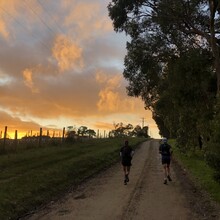 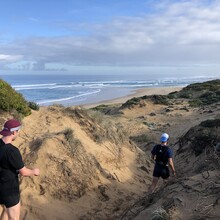 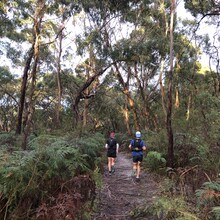 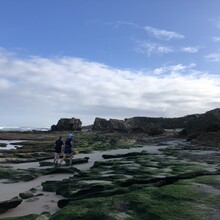 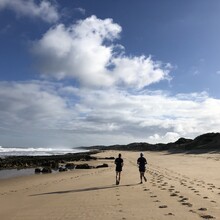 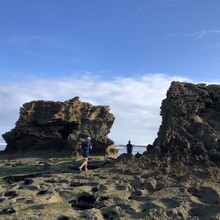 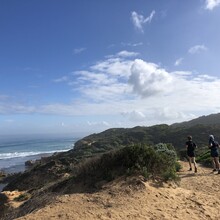 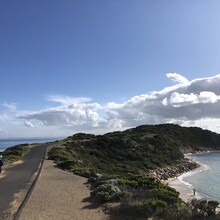 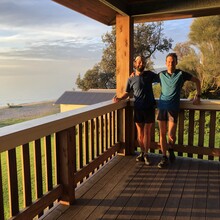 With no races on the calendar, two local lads and one ring in decided it would be a good idea to have a crack at the Peninsula Loop FKT. The Idea was first discussed on a running trip up in the Victorian high country a few weeks earlier, and it soon became apparent we weren’t the only ones with that in mind, Bec and Caroline’s group getting out there that very weekend. We set our sights on the 27th of June, wondering how many others would get there before us. Rowan and Amanda added a female unsupported record the week after, then we got out chance on the 27th as planned, deciding on an unsupported style as well, carrying everything we needed for the day.

Three weeks preparation wasn’t ideal for taking on 100km, but we knew we would have fun out there regardless and set ourselves an ambitious time goal of ten hours. Saturday morning rolled around, and we were fortunate enough to have pretty much perfect conditions. Cool and sunny, with hardly a breath of wind. We took off from the rotunda in Dromana at exactly 7am, with the first inklings of the morning lighting up the start enough to make our way. Our potentially over-confident dinner booking at the pub was for 6pm so we didn’t have any time to spare.

The familiar track up and over Arthurs Seat got us warmed up in no time, and we cruised along ahead of schedule, finishing the fist leg and arriving at Cape Schanck in a little over 2 hours 20 minutes. A quick photo for verification and we were on our way. Whilst the sky for the day was clear, the vegetation along the coastal track leading down to Gunnamatta beach was quite wet, and moving through it we became quite wet ourselves, any hope of keeping our feet dry went out the window.  Once we dropped down and hit the beach we were greeted with low tide, so for the most part the sand was more runnable than we had been anticipating. I’d like to say that this was planned, but in reality, it was down to good luck.

The K’s kept ticking by, albeit a little slower on the beach than the trails, until we stopped for our first water refill at 43kms, around 4 hours in. We tried to get some food down as we continued on, and it was at this point that Klay informed us that his stomach wasn’t feeling the best. I was shocked to hear that he had only managed to eat two shot blocks over the course of the last four hours. We took it easy just jogging and walking for a few kms in the hope that his stomach would come good. It soon became apparent that Klay wasn’t going to be able to get anything down without stopping altogether, and certainly wasn’t going to be able to run another 50 km without food. We discussed our options, Matt and I preferring to finish altogether even if it meant coming in a few hours later than planned, but in the end, Klay decided he would prefer for us to continue on without him and still aim for the sub-10, and he pulled the pin at Sorrento Beach after 5 hours and 53km.

It’s worth noting at this point that as our team would no longer finish together, our classification changes from ‘unsupported’ to ‘supported’, due to Klay now technically being classed as a pacer for the first half. A little frustrating as Matt and I did not receive any outside aid at any point, but it is understandable why these rules exist.

A little disappointed at losing our trail comrade, Matt and I continue on towards Point Nepean. Having lost a little time and our legs feeling momentarily better after a few easier kms, we had to be careful not to get carried away too early. Sub-10 was still on if we stayed consistent and kept our cool. The kilometres ticked by as Point Nepean came and went and we stopped for another refill and what would hopefully be our last stop as we headed out to the bay trail that would take us back to Dromana.

By now small undulations in the trail started to feel like big hills as the accumulation of sand running and the climbing of Arthurs Seat really starting to take their toll on the legs. I was having waves of low patches, while Matt seemed to be holding strong. What is realistically the easiest section began to feel like a real grind. As we past the 90km point, we realised we may be able to duck under 9 and half hours. An arbitrary goal, but we decided to go for it. Interspersing walk breaks with 5min K’s seemed somehow easier that running at a slower pace, and we kept this up for a little while until changes in pace seemed too risky. With around 5k to go Matt felt the twinges of a cramp coming on, but we legged it the final few kms to duck just under our new goal, finishing in 9:29. Perfectly timed for a sunset beer by the beach before making our dinner booking, we really couldn’t have asked for much more!