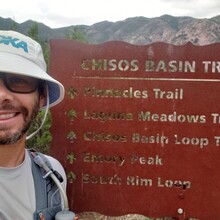 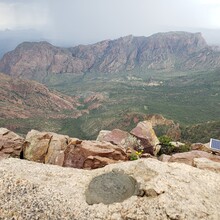 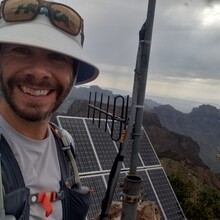 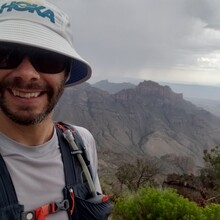 I needed to add a bit of uphill work and intensity into my long run this week so I decided it would be a good chance to better my own FKT on this route. I have run this loop several times and prefer to do it in the clockwise direction to hit Emory Peak first and avoid all the hikers coming up the Pinnacles Trail while you're trying to descend--Laguna Meadows has far less traffic so allows for a faster descent at the end. With that said I do think counterclockwise (the way it was originally submitted on the FKT website and the way my previous FKT was done is probably faster as the uphill grades in that direction are much more runable. I understand, though, that fastestknowntime.com does not distinguish between direction except on certain Premier routes.

Regarding the day, it was 73 F when I started and was expecting mid to upper 80's for most of the run but it started raining as I got up Pinnacles Trail with rain and thunder continuing for most of the run. The rain was a mixed blessing--it certainly kept the temperatures much cooler than they would normally be on a mid-summer day in Big Bend but it also created slick rock and mud conditions so I had to be much more careful with my footing to avoid a fall or injury. Also it was raining so hard on my way down Emory Peak and to Boot Canyon that I actually had a hard time seeing at times. So... on a non-rainy day I think I would have been a bit faster if could have been a little more care free with my foot placement, but if the temps had gotten too hot, it would also have slowed me down. Thus, it was probably a wash on today. It had finished raining about 25 minutes before I finished and by the time I got back to the Basin, the temps were climbing and it was up to 83 F.

I will say, that while I beat my previous time by 13 minutes, it's not too stout of a time and I would encourage people to give it a try and make it more competitive (typically not in mid-summer though). The last FKT I set here was when I had just started running again after 2 months off due to injury and this time I'm right in the middle a hard training block so have some built up fatigue and didn't push overly hard the entire time.

This attempt was unsupported. I carried 3 x 18 fl oz bottles of Tailwind plus some Clif Bloks in my vest. Nutrition and hydration ended up fine and I got lucky the rain kept it relatively cool otherwise I probably would've ran out of water at some point.